Bangladesh vs India: 3 Changes India can make for BAN vs IND 2nd ODI 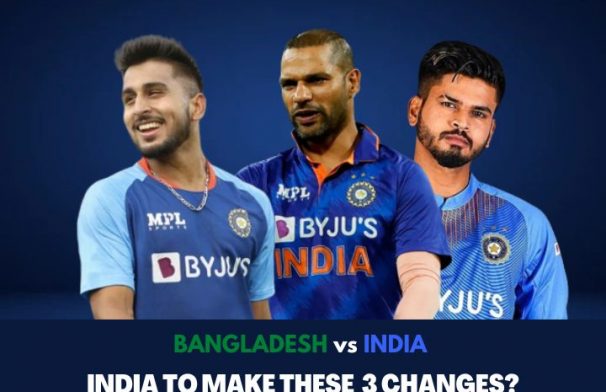 Bangladesh vs India: India’s tour of Bangladesh started on Sunday, wherein Bangladesh had the better off India in the 1st ODI. India was bundled out for mere 186 runs due to a terrific bowling performance from both Shakib and Eboddat Hossain. Indian batters with the exception of KL Rahul failed to score big and that will be a huge concern for India given that the ODI World Cup is just a year away. With the series on the line now, India may bring in some fresh changes to their approach and eleven to level up this series on Wednesday. Let’s see the 3 possible changes India are expected to make for this match.

1. Extra batter in place of Shardul

India struggled big time with the bat in the 1st ODI. Apart from KL Rahul, none of them were able to stitch a good score against this weak Bangladesh bowling unit. Keeping that in mind, India could bring in an extra batter into the XI to increase their batting depth. India played with Sundar and Shabaz at 6 and 7, and it would be better if one more pure batter makes way into that eleven in the top 6. Shardul Thakur who had very little role to play in the 1st ODI can make way for that batter. Ishan Kishan or Rajat Patidar could provide that extra batting cushion.

Umran Malik has been called into the Indian team as the replacement for the injured Mohammed Shami. With the ODI World Cup around the corner, India should give a longer rope to players who are on the probable list for that tournament including the likes of Umran Malik. It’s no secret that Umran is in the plans of the management. So it’s only fair that he gets enough match time before the tournament. He could replace Kuldeep Sen in the eleven.

3. Identifying part-time bowlers amongst the top 6

India’s problem in the multi-nation ICC tournaments has always been the inability of our batter to bowl a few overs if needed. This inability of our batters has reduced the options for the Indian captain several times before. With this series having no significance whatsoever, India could try to get a couple of overs out of players like Shreyas or Kohli and see how it goes.

An engineer who watches, plays, and writes cricket. Out here to tell you interesting stories from 22 yards and beyond.
Previous ArticleBig Bash League 2022 Squads, Schedule, Playing 11, Dream11 Prediction, Live Score and Streaming
Next ArticleBangladesh vs India 2nd ODI: Mirpur Weather Update, Chance of Rain in BAN vs IND Match