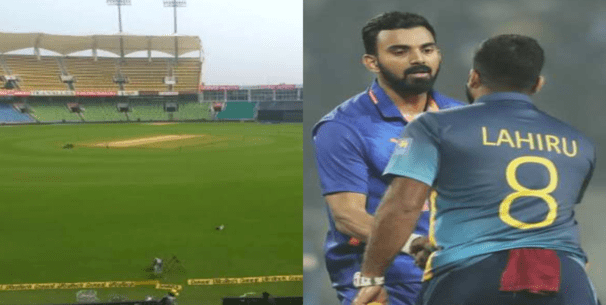 India vs Sri Lanka, 3rd ODI: India men and Sri Lanka men are set to face each other in the third and final game of the three-match One Day International (ODI) series hosted by the Indians. The match will be played on Sunday (January 15) at 1:30 PM (IST) at the Greenfield International Stadium in Thiruvananthapuram.

India recently won the second game in Kolkata to seal and lead the series 2-0. The side performed exceptionally well under all circumstances. The Rohit Sharma-led men wouldn’t mind another victory in their account.

Sri Lanka, although, weren’t enough to attain victory against the mighty Indians. The visitors would try to avoid a whitewash away from home.

As this, another contest between the neighbors moves further, here’s the weather update from Thiruvananthapuram, where the India vs Sri Lanka game will be played.

It’s a cold wave in India currently, as we all know. Hence, the weather is unlikely to play any role in the game, except for that dew thing.

Further, the Thiruvananthapuram weather, on Sunday, is forecasted to hover around 31° Celcius during the daytime and 23° Celcius at night. During game time, according to the Weather Channel, the winds will flow at a speed of 10-15 km/h. During the match time, there will be 65 to 80% humidity in the air. No rain has been predicted around the venue.

Overall, the sky will be clear and there will be no weather interruption during India vs Sri Lanka 3rd ODI.

KL Rahul, and Kuldeep Yadav star in the low-scoring derby in Kolkata

Previously, in the second ODI, on January 12, the visitors batted first and scored a relatively low total of 215. Nuwanidu Fernando was the top-scorer from the Lankan side; he scored 50 runs in 63 balls, with six boundaries. Meanwhile, Mohammed Siraj and Kuldeep Yadav picked up three wickets each for India.

In response, India too struggled to get the momentum going. Though, the duo of KL Rahul and Hardik Pandya eased things for the hosts. Rahul scored an unbeaten, match-winning knock of 64 runs with six boundaries in his account. His partnership of 75 runs with Pandya and Axar Patel’s tiny cameo aided India to win the game by four wickets.