Virat Kohli ICC Ranking in all format: Check out Virat Kohli’s best ICC ranking across format over the years Virat Kohli ICC Ranking in all format: Virat Kohli is one of the most successful cricket players in history. His performance on the field has earned him a place in the top 10 of the International Cricket Council (ICC) rankings for batsmen. He is currently ranked 15th in the ICC Test rankings, fourth in ODIs, and 13th in T20s (as of January 2023). He has also been awarded a number of prestigious awards for his achievements, including the ICC Player of the Year award twice. His success speaks for itself and his dedication to cricket is something to be admired by all.

Virat Kohli ICC Ranking in all format over the years

Kohli has been consistently ranked as one of the top batsmen in the world and holds the record for highest batting averages among all current international players. Virat Kohli’s success on the field is a result of his hard work, dedication and commitment to excellence. He has set an example for aspiring cricketers all over the world and continues to inspire millions with his achievements. Virat at one point of time was averaging over 50 across formats and was the only batsman to achieve this rare feet. 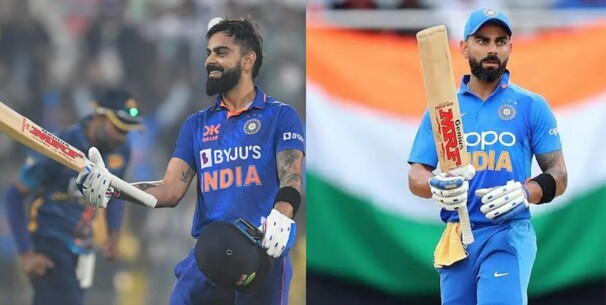 Talking about Virat Kohli’s best rankings over the years across formats, he achieved 897 rating points in T20Is in 2014 when he was at the top of the pile. In ODI’s his highest rating has been 911 in 2018 and occupied the pole position for quite a long time. In fact, Virat Kohli has stayed at the numero uno position in ODIs for the most number of days among Indians. Talking about his Test rankings, Kohli highest rating has been 937 which he achieved in 2018.

He has dominated Test cricket rankings at the top spot but after an ordinary run between 2020-22, the ‘King’ slipped to his lowest ranking i.e.,15th. With a 4-match home Test series scheduled in February against the mighty Aussies, Kohli’s fans are surely expecting their King to dominate and help India reach the WTC 2023 finals.