For the unversed, Ravindra Jadeja is affectionately known as “Sir.“ His successful cricketing career and the stature the all-rounder possess, this salutation definitely suits him. But have you ever wondered why is Ravindra Jadeja called Sir? Well, we have the answer to this question.

Why Ravindra Jadeja is called sir?

Ravindra Jadeja is fondly called ‘Sir’ by his mates. Being a close friend of former Indian skipper MS Dhoni, Jadeja and Dhoni have a great camaraderie and it was MS Dhoni who gave him the name ‘Sir Ravindra Jadeja’ in 2013. Dhoni used to be quite active on social media in 2013, something you will barely come across nowadays.

However, the former Indian skipper used to post sarcastic tweets back then by the name ‘Sir Ravindra Jadeja’ and that is how Ravindra Jadeja got this name. Dhoni once tweeted, “If you give Sir Jadeja 2 runs to score from 1 ball he will win it with the ball left.“ Check some of the Tweet threads below, 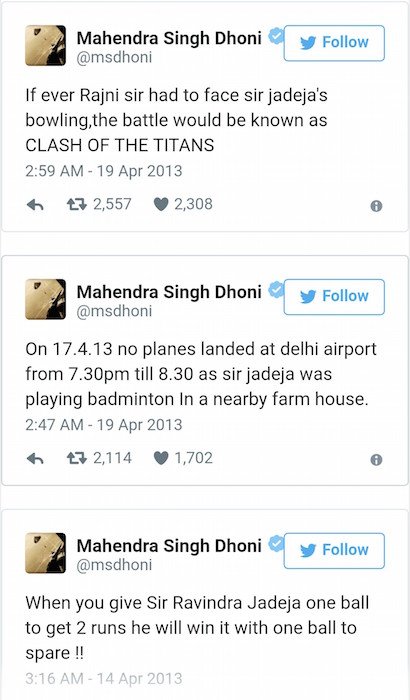 The Indian all-rounder suffered an injury during the ACC Asia Cup 2022 and is currently recovering from it. Jadeja’s knee injury forced him to miss the all-important ICC T20 World Cup 2022. The 33-year-old underwent a surgery, and his recovery is in progress. However, the all-rounder is expected to be available for the IPL 2023 and once again represent Chennai Super Kings. In Jadeja’s absence, Axar Patel filled in the India’s squad for the ICC T20 World Cup in Australia.

An ardent sports enthusiast who likes to write in such a manner so that the readers could relate themselves and feel the passion of the game.
Previous ArticleHardik Pandya Chain: Check out Hardik Pandya’s glittering chain collection
Next ArticleIND vs SL: India Squad Announced for India vs Sri Lanka ODI Series. Who is India Captain?