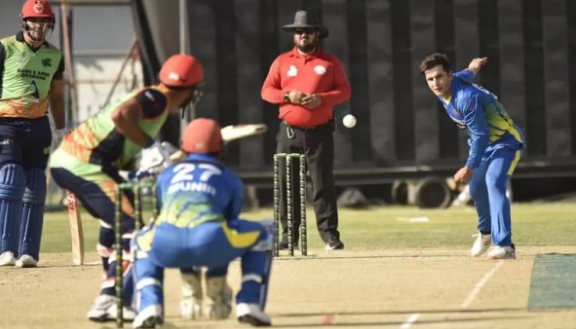 AM vs SG Dream11 Prediction

Amo Region will be up against Speen Ghar Region at the Kandahar Cricket Stadium for the 8th game of the Afghan One Day Cup 2020. Speen Ghar Region registered a comprehensive 111-run win over the Boos Region in their most recent fixture. As a result of their impressive win, Speen Ghar Region have now move onto to the third spot in the points table. Another win for them in the morning could assist them to make it into the eliminators. Amo Region on the other hand have secured two wins from two games and are at the second spot in the points table. Amo Region will be eager to carry on their winning momentum going ahead as it could secure them a spot in the knockouts as well. With that being said, here is the AM vs SG Dream 11 Prediction for the upcoming contest.

Team Combination: Javed Ahmadi and Zahid Zakhail are expected to open the innings with the bat. Afsar Zazai, Azmatullah Omarzai and Farhan Zakhil could feature in at numbers three, four and five. Abdul Wasi and Nangeyalia Kharote are likely to accommodate the midfield. Sharafuddin Ashraf, Mirwais Ashraf and Wafadar Momand could be in charge of the bowling attack.

Tamim Surkhorodi and Samiullah Shenwari are expected to open the innings for Speen Ghar Tigers. Ikram Ali Khil, Taqriq Stanikzai and Bahir Shah could further solidify the batting lineup. Batin Shah and Farhad Momand are likely to fill in at the middle order. Qais Ahmad, Zubaid Akbari and Shawkat Zaman could be in charge of the bowling attack.

AM vs SG Dream11 Teams

Samiullah Shinwari has scalped seven wickets in the tournament and has also scored 67 runs from the last three games.

Zubaid Akbari has been one of the standouts of the tournament as he’s scored 108 runs from the last three games.

Javed Ahmadi is the leading run scorer of the tournament and should be added to the AM vs SG Dream11 Prediction side. Ahmadi has amassed 157 runs in the tournament so far.

Sharafuddin Ashraf scalped five wickets in the previous game against Mis Ainak and will be keen on carrying on his wicket taking abilities in the following game.

Who will win AM vs SG Today Match Prediction

Both sides have their fair amount of quality players and flair who could end up making an impact in the the game. However, the Amo Region unit are on the back of two consectuive wins and will be heading into the fixture as the more confident side. With that being said, the AM vs SG Today Match Prediction odds are in favour of Amo Region to register a win.