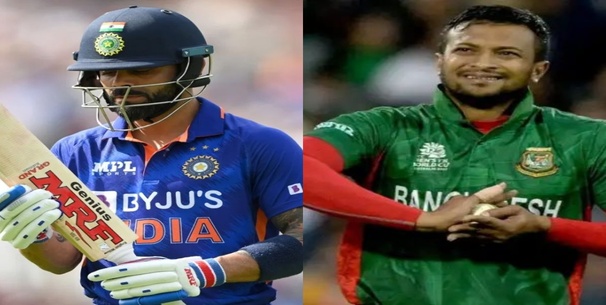 BAN vs IND Dream11 Team: The opening ODI encounter between hosts Bangladesh and India is scheduled to be played on 4 December, 2022 (Sunday) at the Shere Bangla National Stadium in Dhaka. Bangladesh ended up losing their previous ODI assignment at the hands of Zimbabwe by a 2-1 margin and they will want to improve their game both with the bat and ball. On the other hand, India are coming off after having conceded a 0-1 ODI series defeat during the recently concluded New Zealand tour.

For India, Virat Kohli will definitely be an important performer to watch out for in the upcoming Bangladesh vs India ODI series. The modern day legend looked in a staggering form during the recent few months and will now be looking forward to replicate the same in the 50-overs format as well. Virat has composed a massive total of more than 12,000 runs from as many as 262 ODI matches at an excellent average of 57.68. The right-hander has smashed as many as 64 fifties and 43 hundreds in ODI cricket so far.

Bangladesh’s senior all-rounder Shakib Al Hasan has been a vital clog for his side especially in the limited-overs format due to his amazing capabilities both with the bat and ball. Shakib has smacked more than 6700 ODI runs at a fine average of close to 38 that includes a total of 50 half-centuries and 9 centuries. He has also been really impressive with the ball as witnessed over the years having picked as many as 285 wickets from 221 ODI games at a brilliant economy of less than 5. The former Bangladesh cricketer will be a dangerous player to watch out for in these three ODI matches.

Indian captain Rohit Sharma will surely be hoping to return back in form after a horrible performance during the recently concluded ICC T20 World Cup 2022. However, he has stunning numbers in ODI cricket having composed more than 9000 runs at an average of nearly 50 with a record number of three double centuries. Rohit has also notched up a total of 45 fifties and 29 centuries in the 50-overs format so far. The senior Indian opener has smashed a brilliant half-century in his last 5 ODI innings.

Bangladesh stand-in captain Liton Das will be a key player for his side in these three ODI matches against India. He has done reasonably well for Bangladesh during the recent while across formats especially at home. The right-handed batsman has scored 1835 runs from 57 ODI matches at an average of 33.98. Liton has composed a total of 7 half-centuries and 5 hundreds so far in ODI cricket. He has smashed as many as two fifties in his last 5 ODI innings earlier this year.

For India, KL Rahul is very much likely to bat in the middle-order during this three-match ODI series against Bangladesh as skipper Rohit Sharma and Shikhar Dhawan will open the batting. While keeping away his inconsistency in the shorter format of the game, he has done impressively well in ODI cricket with a total of 1665 runs at an average of 45. Rahul has already smashed two fabulous centuries while batting in the middle-order during the recent while. The right-hander has scored 10 fifties and 5 centuries in the 50-overs format.