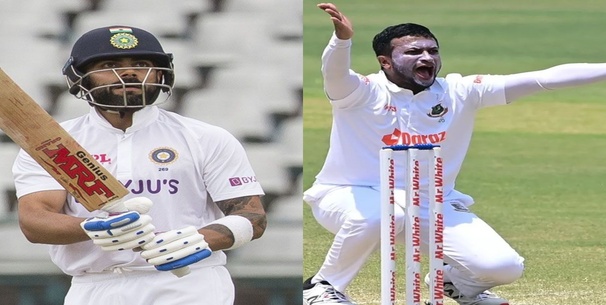 BAN vs IND Dream11 Team: After a poor loss in the ODI series, Team India are now set to play a two-match Test series in Bangladesh and the opening Test match will be starting from 14 December, 2022 (Wednesday) at the Zahur Ahmed Chowdhury Stadium in Chattogram. India ended up losing their most recent Test match in this calendar year at the hands of England but they also defeated Sri Lanka 2-0 in the home series. On the other hand, Bangladesh suffered a poor 0-2 series loss during their last Test assignment in West Indies earlier this year. There will be a lot of star players in action during this BAN vs IND 2022 Test series.

Former India captain Virat Kohli looked in a sensational touch during the recently concluded third ODI match against Bangladesh. He scored his much-awaited 44th hundred in ODI cricket and now will be aiming to replicate the same form in the Test matches. In his staggering career so far, Kohli has notched up more than 8000 runs from as many as 102 Tests at an average of nearly 50. The right-handed batsman has composed a total of 28 half-centuries and 27 hundreds in Test cricket so far. He has also smacked as many as 7 double-hundreds in the longest format of the game.

Bangladesh captain Shakib Al Hasan has immense experience of playing international cricket and doing amazingly well both in the batting as well as bowling departments. Shakib has composed a total of 4251 runs while having played as many as 63 Test matches at an average of 39. He has scored as many as 29 fifties and 5 centuries in the longer format of the game so far. The Bangladeshi left-arm spinner has picked up a total of 225 wickets at an average of 31.32. Bangladesh will need a special effort from their captain to win this first BAN vs IND Test starting from Wednesday.

India’s senior off-spinner Ravichandran Ashwin will surely be an important performer to watch out for in the upcoming Bangladesh vs India 1st Test match from the fantasy cricket point of view. Ashwin has claimed a total of 442 Test wickets from 86 matches at an excellent average of 24.13 that includes as many as 30 five-wicket hauls and 23 four-wicket hauls. The right-handed spin bowling all-rounder has also scored close to 3000 runs in Test cricket that consists of 12 fifties and 5 hundreds. The senior Indian spinner has a fabulous track record on the sub-continent pitches.

For Bangladesh, spin bowling all-rounder Mehidy Hasan Miraz is coming into this IND vs BAN Test series on the back of some brilliant performances in the first two ODI matches against the same opposition. He went on to score his maiden hundred during the second ODI against India and also added a record 10th wicket partnership in the opening game to guide the hosts towards two memorable victories. Mehidy has taken a total of 135 wickets from as many as 35 Test matches at an average of less than 35. He has also scored more than 1000 runs that includes three half-centuries and one hundred.

India’s stand-in captain KL Rahul will be looking forward to lead his side from the front in this opening Test match against Bangladesh. He recently scored a fine half-century in the first ODI against the same opposition. Rahul has smashed a total of 2547 runs from 43 Test matches at an average of 35.38. The Indian opening batsman has compiled as many as 13 half-centuries and 7 hundreds in the longest format of the game. He also scored a wonderful hundred during India’s historic Test victory over England at the Lord’s cricket ground.