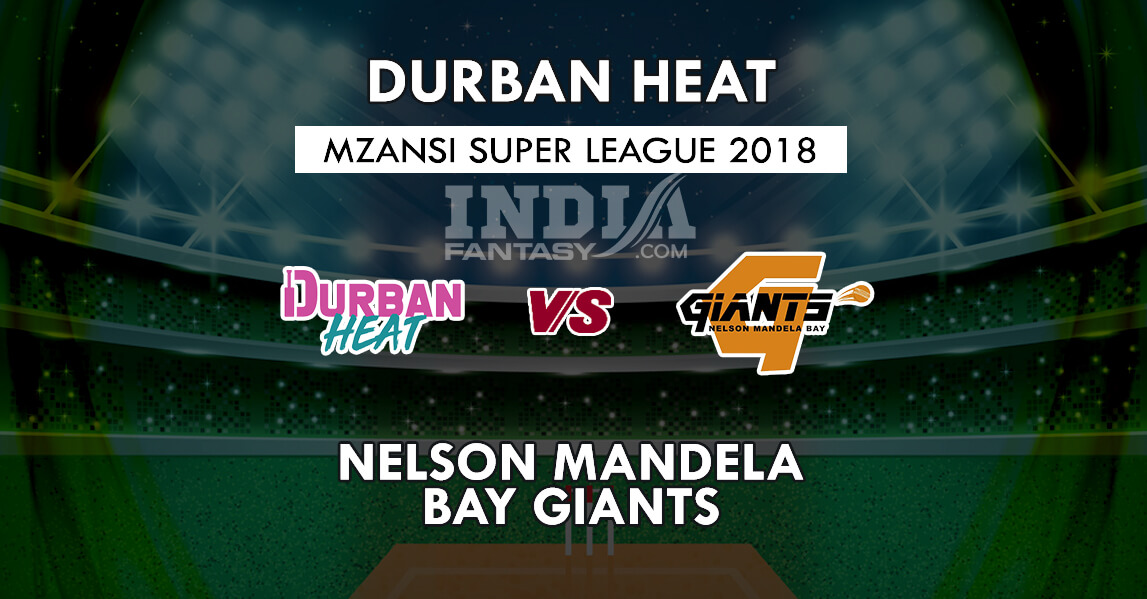 Batting has been the main concern for Heat throughout the tournament. In six games, Durban Heat has managed just one win so far. Their only win came against Tshwane Spartans in the second encounter where they clinched 10 runs win under the DLS method. With just four more games remaining, Heat would be hoping to register a couple of wins and salvage their pride. They have been boosted with the return of Rashid Khan. The Afghanistan spinner was taking part in the T10 League in Dubai and has re-joined the squad.

On the opposite, the high-flying Nelson Mandela Bay Giants faced a crushing 81 runs defeat against Jozi Stars in their last encounter and would be hoping to bounce back strongly. Placed second in the league table, Bay Giants have secured four wins out of seven encounters.

When last time both the teams met at Port Elizabeth, Nelson Mandela registered a massive 9 wickets win over Durban Heat. Put into bat, Heat posted 127-6 on the scoreboard with the help of the twenties from Khaya Zondo (26),  Albie Morkel (28), Vernon Philander (26) and Keshav Maharaj (22*). Junior Dala and Chris Morris returned with 2 wickets each for Bay Giants.

In response, Bay Giants chased down the target in 17.3 overs with 9 wickets remaining. Skipper JJ Smuts (62* of 52) and Marco Marais (42 of 38) were the key performers with the bat.

In wicketkeeper, M van Wyk will be a better pick.

Fantasy Tip: Hashim Amla was dropped due to poor form in the last match. C Jonker is doubtful.

In all-rounder, you can pick from Chris Morris, V Philander, JJ Smuts and Rashid Khan.

A 90's born who has witnessed Sachin becoming "The God", Dhoni becoming "The only Captain to have won all the ICC trophies" and Kohli turning into a "run-machine". Cricket is something I am crazy for and I try to deliver the best and true I can in my every writing.
Previous ArticleAUS VS IND DREAM11 PREDICTION TEST PREVIEW TEAM NEWS, PLAYING 11
Next ArticlePUN VS HIM DREAM11 PREDICTION RANJI TROPHY PREVIEW TEAM NEWS, PLAYING 11