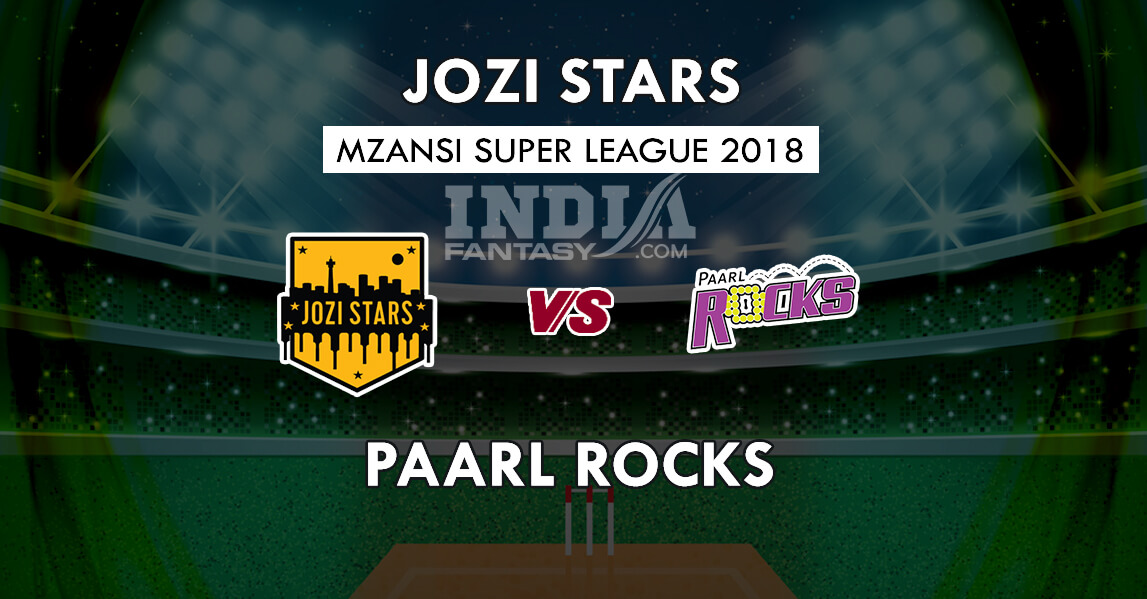 Jozi Stars vs Paarl Rocks, Match 05 | JOZ vs PR WHO WILL WIN

As the caravan of the fledgling Mzansi Super League rolls on, Jozi Stars will lock horns with Paarl Rocks at the Boland Park in Pearls on Tuesday.

Both Jozi Stars and the Rocks aiming for their maiden win

Both sides did not get off to an ideal start to the tournament.

Jozi Stars’ lackluster batting effort that saw them scrap their way to 7-124 in 20 overs with the likes of Chris Gayle (23), Dane Vilas (38) and Rassie van der Dussen (38) failing to kick on and post a substantial score.

Defending 125, Beuran Hendricks got his side to a good start, nipping out JJ Smuts and Marco Marais for a duck but Ben Duckett held the fort with an imperious 45-ball-75 to hand JS a five-wicket loss.

They’ll face Paarl Rocks, who came agonizingly close of overhauling 203 set by the Tshwane Spartans. Cameron Delport led the run-chase with an imperious 43-ball-73 but the succeeding batsmen failed to kick on and post a substantial score.

Mangaliso Mosehle scored a brisk 8-ball-20 but it was too little too late as they eventually fell short by 1 run.

Here’s how both teams’ might line-up for JOZ vs PR:-

Wicket-Keeper- Mangaliso Moshehle (20) and Dane Vilas (38) both had a decent outing in the last game. However, since Vilas bats up the order, he’ll be an ideal choice for your Dream11 side.

Batters- Rassie Van der Duisn is the lynchpin of the Jozi Stars unit while  Michael Klinger and Vaughn van Jaarsveld will be the prudent choices from Paarl Stars.

All-rounders- Dan Christian will look to make amends for a forgettable last match while David Wiese will look to put in a good performance in the absence of Dwayane Bravo.

Disclaimer- Management can take any decision at the last moment. The JOZ vs PR dream11 match predictions we are providing here is based on our research and analysis. We urge you to pick your JOZ vs PR playing 11 and make your own JOZ vs PR Dream11 team if you feel so. Also, hit the bell icon to never miss an important update from us.