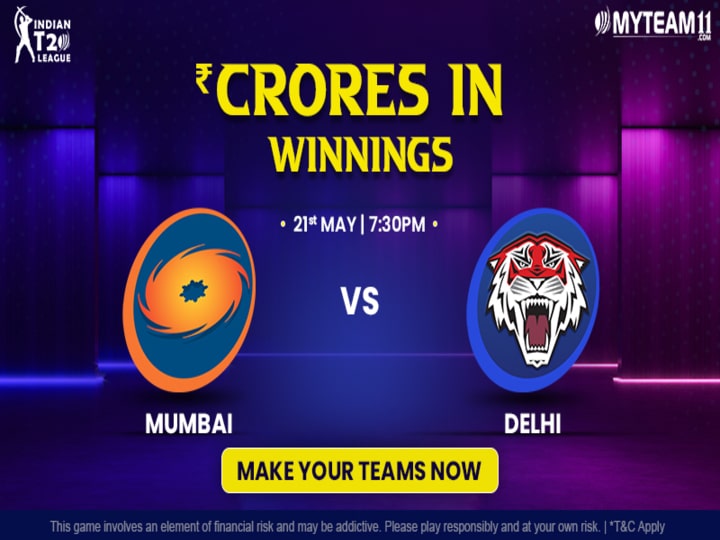 Mumbai and Delhi will battle it out in the 69th match of the Indian T20 League 2022. With only a spot left in the playoffs, Delhi would like to seal its position as the number 4 spot in the points table and dethrone Bangalore.

However, Mumbai will do everything in its hand to make the lives of Delhi players miserable and stop them from qualifying in the playoffs.

The former 5-time Indian T20 League winner joined the party late this season. Mumbai lost their first 6 matches of the tournament. Now that they are out of the playoffs race, the men in blue are making lives difficult for other teams.

In the last match, Mumbai lost the match against Kane Williamson’s Hyderbad. Sitting at the bottom of the points table, the men in Blue still have one match left before the Indian T20 League 2022 is officially over. The playing 11 have been all over the place this season, with no dependable player in the batting and bowling dvisons, the team suffered greatly.

The addition of Suryakumar Yadav worked wonders for the team but he had to leave the tournament early because of injuries. Kieron Pollard was dropped in the last match after having an horrendous tournament. However, the team would like to win their last match in the tournament and keep their heads high after the match is over.

The Delhi boys are writing their own fate in the Indian T20 League 2022. From multiple players suffering from COVID-19 to Prithvi Shaw getting ruled out of the tournament because of injuries, the Delhi team has seen it all. However, Rishabh Pant and his boys are giving a tough fight to the opponents, and keeping the points table alive.

The team is currently at number 5 spot in the points table and is eyeing to enter the playoffs. In the last match, Delhi won the match by 16 runs. Unfortunately, David Warner got out on the first bowl of the innings. However, the rest of the team took the matter in their hands and helped the team putting on the score of 159 runs. Mitchell Marsh stole the show with his over-the-top batting performance again. The Australian all-rounder hit 63 runs off just 48 deliveries. His innings had 3 sixes and 4 fours.

The bowling of Delhi has been on-and-off so far in the season. However, with the race of playoffs getting more intense, the team must devise new ways to dominate the batters of other teams.

Wankhede Stadium is one of the highest-scoring grounds in the nation. The average first innings total at the stadium has been above 180 runs. However, the pitch supports batters but also assists bowlers as the match progresses. In the last few games at the stadium, teams have struggled to score big totals.

Suggested Playing XI No.1 for Mumbai vs Delhi MyTeam11 Team:

Suggested Playing XI No.2 for Mumbai vs Delhi MyTeam11 Team: