Pakistan and Bangladesh lock horns for the first time in the Asia Cup 2018 in a virtual semi-final in the evening to secure a place against India in Friday’s final.

Both the teams have encountered a couple of wins and defeats as well and are standing at a position where they need to perform to their full potential to fancy their chances. In a similar situation in Asia Cup 2016 meeting, Bangladesh thrashed Pakistan to reach the final.

Both the teams secured last-over win against Afghanistan while lost their respective encounters against India who are comfortably waiting for an opponent to compete for the title. While Pakistan’s Shoaib Malik showcased his experience while chasing 10 of the final over against Afghanistan, Bangladesh were able to hold on to their nerves while defending 8 of the final over.

So, both the teams need to showcase a similar performance to take an edge over the other when the clash begins at 05:00 PM IST  at Sheikh Zayed Stadium, Abu Dhabi.

Here, we are going to tell you about a new fantasy cricket website -Dotball.com which is quite easy to use and has less competition than other platforms. So, give it a try and you might win easily!

Signing in has never been so much easier. You just need to visit the website – www.dotball.com

From there you can download the free Android App on your smart phone or can sign in directly from the website by clicking in Let’s Play.

Once you click on Let’s Play, you will be directed to sign in page where you need to enter you mobile number and an OTP will be sent to your mobile and you can play. That’s It.!

The most interesting thing is that you will get the sign bonus of Rs.51 in your wallet.

Imrul Kayes is expected to retain his spot after the much crucial 72 runs knock against Afghanistan.

One among Liton Das and Nazml Hossain can be replaced with Soumya Sarkar. Most probably, Nazmul Hossain Shanto will have to sacrifice his place after Liton Das scored 41 in the last match.

How to make PAK vs BAN Dotball fantasy team?

Like all other fantasy cricket websites, you get some credit to make your fantasy team. The credit offered here is 100 and you have to choose 1 wicket-keeper, 3-5 batsman, 3 to 5 bowlers and 1 all-rounder minimum.

Now, you need to use your skills in picking the best set of players in the allotted budget. Also, the maximum players you can choose from a team is 6, i.e., 6 from one side and 5 from the opposition.

So, let’s make the team-

In wicket keeping, Sarfraz Ahmed will be slightly better as he is budget friendly and also Mushfiqur Rahim has not produced any big innings apart from  a century in the opening game. 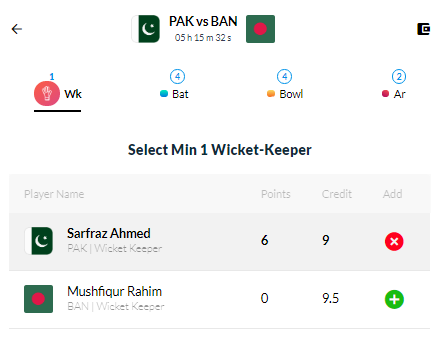 In batsmen, Babar Azam, Imam Ul Haq, Liton Das and Imrul Kayes will be the perfect choice. You can also take Fakhar Zaman but he hasn’t looked in form so far in the tournament.

Picking up the bowlers:

In bowling, Mustafizur Rahman, Mehidy Hasan, Hasan Ali and Shaheen Afridi will be the safest bet from both the sides.

Picking up the all-rounder:

In all-rounders the best choice will be Shoaib Malik and Shakib Al Hasan. While Shoaib has been consistently contributing with bat, Shakib can help in earning points with both bat and ball. However, as Shakib misses out today, Mahmudullah will be the right choice from Bangladesh. So, here’s the fantasy team.

The contest closes at 05:00 PM IST. So, you can make changes to your team even after the toss.

On the home page after signing in you will get a list of the upcoming matches in which you can participate. Dotball.com provides ample of lucrative contest including – The BIG League, Winner Takes All, Krack Jack, Three on a Match, The Seven Samurai, etc. You can choose any of them as per you skills. Please note: The team we have provided here is based on our analysis and understanding. You can go with the same team or choose you own.

A 90's born who has witnessed Sachin becoming "The God", Dhoni becoming "The only Captain to have won all the ICC trophies" and Kohli turning into a "run-machine". Cricket is something I am crazy for and I try to deliver the best and true I can in my every writing.
Previous ArticleHAR vs RAJ Dream11 Prediction Vijay Hazare Trophy 2018 Team News, Playing 11
Next ArticleSAU vs TAS Dream11 Predictions, Team News, Match Preview & Playing 11