BAR vs RB Dream11 MATCH PREVIEW:
Barcelona will aim to go into the International break as the leaders in La Liga when they host Real Betis at Camp Nou, in Barcelona on Sunday evening (IST).

Barcelona:
Barcelona drew 1-1 in the midweek Champions League match against Inter Milan and now just need one point from the six available to assure their participation in the knockout stage. The score draw at San Siro extended their unbeaten run to nine matches in all competitions, with six of those ending in victories.

While the life in La Liga is cruising after the Catalan giants managed to recover from a difficult four week period where they lost one and earned just three points from a maximum of 12 points. That period threatened to derail their campaign and questions were being asked whether Ernesto Valverde was doing the justice to the talent he has at his disposal.

But a Messi masterclass at Wembley against Tottenham Hotspur changed everything and since then the reigning La Liga Champions have won six times in the last eight matches.

Surely, Barcelona are on sing at the moment.

Real Betis:
Real Betis, on the other hand, have won three, drew four and tasted four defeats in the first 11 games of the season. There is no doubt that this has been an underwhelming start, with the Seville outfit occupying 14th position. More so, they are just four points away from the relegation zine coming into this match.

Since the last international break, Quique Setién’s side has played three league games, collecting just one point, losing two and drew the other one.

Betis are a club with high ambitions and the last seaosn’s 6th place finish only whetted their appetite for high league positions. The Béticos are certainly one of the best-supported clubs in Spain as they draw in over 50,000 supporters into their fabled stadium Estadio Benito Villamarín week in and week out.

However, the performance on the pitch has to be good if they are to break into the top-4.

Barcelona:
Injured – Centre-back duo of Thomas Vermaelen and Samuel Umtiti remains out for the Catalan giants, while Philippe Coutinho joins them on the operation table and will be sidelined until the end of this month.
Suspended – None
Questionable – Superstar Lionel Messi hasn’t played since injuring his arm in the 4-2 win over Sevilla. The five-time Ballon d’Or winner is in contention to start in this match.

Note: Both Ousmane Dembele and Malcom are in contention to start this match.
Key Players – Suarez, Rakitic

Real Betis:
Injured – Javi Garcia is the most notable absentee for the away side.
Suspended – None
Questionable – Twenty-two-year-old right-back Francis Guerrero’s fitness will be assessed ahead of the match. 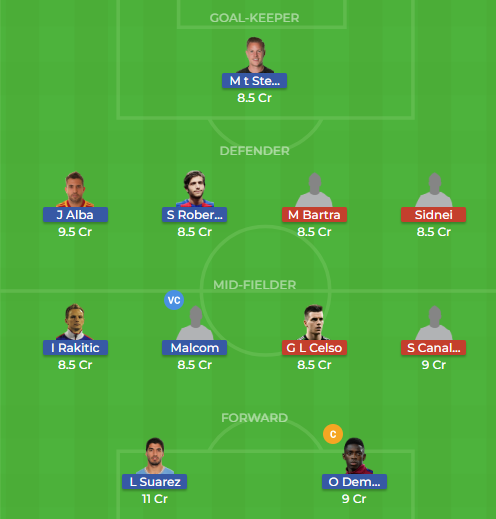 INDIA FANTASY PREDICTION:
Irrespecive of the form Barcelona are in, they are expected to romp to three points in these kinds of matches.
A home win. Prediction (at least)

THIS BAR vs RB Dream11 MATCH PREVIEW IS BASED ON OUR RESEARCH AND UNDERSTANDING FROM VARIOUS NEWS SOURCES. YOU CAN SELECT YOUR OWN PLAYING 11 ON THE BASIS OF TEAM NEWS AND ALL THE OTHER INFORMATION REQUIRED FROM THIS WEBSITE. USING OUR TEAMS IN ANY CONTEST WILL INCREASE THE PROBABILITY OF HAVING THE SAME EXACT TEAM WITH OTHER USERS CAN LEAD TO THE WINNINGS SPLIT.