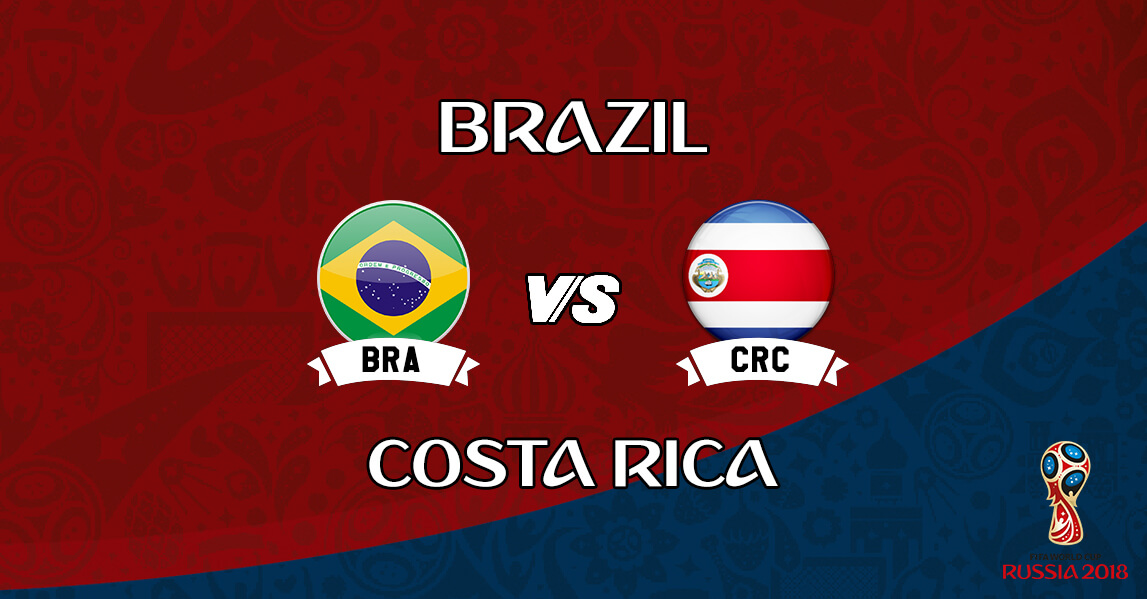 It is Brazil, the five times world cup winners, will now commence their World Cup journey as they face Costa Rica in their second game in the World Cup. After a disappointing result in their first game, Brazil would want to live up to the expectations in this game after they fell to break the tie against Switzerland in their first game. Brazil looked focused in their first game but Switzerland’s defense was exceptional after they conceded the opening goal from a wonder shot from Philippe Coutinho. Despite having one of the fiercest attacks in this World Cup, Brazil would be really disappointed how the things turned in the first game but with a firm resolute they take on Costa Rica. Brazil’s talisman Neymar Jr, limped off from training before this match and he remains doubtful to play this game. However, Neymar’s absence will see Philippe Coutinho playing in his favourite position and may give Roberto Firmino a starting berth in this game.

On the other hand, Costa Rica had a tough time against Serbia in their first outing in this world cup. Sergej Milinkovic-Savic and Luka Milivojevic tore the Costa Rican midfield and defense as they created chances for their team ultimately winning the game for their team and Costa Rica was left high and dry. However, Costa Rico needs to improve their line of defense because if Serbia can tear it apart, Brazil is most likely to clean them sweep but the absence of Neymar may give Costa Rican defenders the hope to not so give up easily against the might of Brazil.

This FIFA World Cup 2018, Group E, 2nd match is to be played at Saint-Petersburg Stadium at 1300 hours in Local time. A thrilling game awaits everyone on Match Day 9 for everyone and can be watched live on Sony LIV.

Costa Rica: Christian Bolanos is expected to feature in this game after impressing everyone on the ground coming off the bench in their first game. Apart from that not many changes are expected from the Costa Rican side. In fact, they are most likely to play a similar identical playing XI that they did in their first game against Serbia. Johan Venegas may be benched in this game.

Brazil: Neymar Jr is doubtful to start this game since he picked up an injury while training for this game but it all started in the first match against Switzerland as they tacked Neymar 10 times in one game. However, the absence of Neymar Jr would see either Fred or Roberto Firmino starting up front with Philippe Coutinho will be shifted in his favourite spot on the ground. Renato Augusto may get a starting berth in this game.

Brazil drew 1-1 against Switzerland while Costa Rica lost 1-0 against Serbia in their opening game. So it’s a must-win game for both the teams.

Neymar limped out of the first training session but Brazil Football Federation quickly responded with a statement that their football star was just fine.
The five-times world champions opted for a closed practice session, but the federation posted photos and a video of Neymar in action in training with the rest of the squad.
While there are some rumors that the PSG star missed both the training sessions.
So there remains a doubt on his participation and if that’s the case, expect Roberto Firmino to start upfront with Gabriel Jesus.
Costa Rica, on the other hand, haven’t posted any injury concerns ahead of this match. If something pops up we will definitely notify you.
03:35 pm,
Thiago Silva will captain Brazil in this match.
Brazil manager Tite has confirmed he will name an unchanged XI.

Brazil will have been left reeling from their 1-1 draw with Switzerland on Sunday and will hope to improve when they meet Costa Rica in Friday’s early kick off. Costa Rica, too, need to up the ante when they face Brazil. However, they face an uphill struggle in their bid to progress to the next round of the World Cup after their 1-0 loss to Serbia. One would expect Brazil to improve when they take on Costa Rica and get their World Cup up and running here.

NOTE: THIS BRA vs CRC Dream11 MATCH PREVIEW IS BASED ON OUR RESEARCH AND UNDERSTANDING FROM VARIOUS NEWS SOURCES. YOU CAN SELECT YOUR OWN PLAYING 11 ON THE BASIS OF TEAM NEWS.

THIS BRA VS CRC MATCH PREVIEW IS BASED ON OUR RESEARCH AND UNDERSTANDING FROM VARIOUS NEWS SOURCES. YOU CAN SELECT YOUR OWN PLAYING 11 ON THE BASIS OF TEAM NEWS AND ALL THE OTHER INFORMATION REQUIRED FROM THIS WEBSITE. USING OUR TEAMS IN ANY CONTEST WILL INCREASE THE PROBABILITY OF HAVING THE SAME EXACT TEAM WITH OTHER USERS CAN LEAD TO THE WINNINGS SPLIT.