What started with 32 teams three weeks before has come to the remaining four in this world cup. The first semi final saw France and Belgium locking horns and in the second semi final, it is Croatia vs England at Stadion Luzhniki.

The English fans have started counted the days and as their team gets closer to the world cup, their dream of seeing football finally coming home is getting bigger and bigger. Since 1990, England failed to reach to the top four in the World Cup and now that they are here, they would want to go for glory. The three lions had a very comfortable win against Sweden in the quarter final which they won 2-0, thanks to the first half header by Harry Maguire that gave England the lead and which was doubled by Dele Alli. England had been really tight in the defense in their last game and if they can replicate the same in this game as well, they are most likely to go through the next round. With Harry Kane up front, chasing the Golden Boot award, it is expected that Kane would want to keep his tally growing in this game as well.

On the other hand, the Crotians might have started feeling the heat of the World Cup with both of their last two games going to the penalty shootout; it has exposed the physical vulnerabilities of the players as well as their mental strength. In their last match against the host nation, Croatia struggled to stay on the ground for 120 minutes with Sime Vrsaljko picking up hamstring injury alongside their goalkeeper Subasic who held his ground despite having physical strain and even Mario Mandzukic looked exhausted in the first half of the extra time. So, Croatia would want to double up their efforts in this game and would want to end the match in the first ninety minutes. To do so, Croatian midfield has to once again come up firing like they did in their group matches.

This clash is going to be a difficult test for both these teams because England might have a comfortable win against Sweden but if the game goes on to the penalties, the mental pressure would be too high for both the teams. Croatian defense had been very vulnerable from set pieces and long range shots so England need to bank in this opportunity if they are to go to Moscow to play the final. It remains a completely balanced match with both the teams having enough firepower to take each other down.

FIFA World Cup 2018, Semi Final II is to be played at Stadion Luzhniki, at 1900 hours in Local time. A thrilling game awaits everyone on Match Day 25 for everyone and can be watched live on Sony LIV.

Croatia: There are not many suspension concerns for the Croatians ahead of this game. Danijel Subasic is expected to be fit by this game starts. Sime Vrsaljko is expected to be rested in this game because of the injury he picked up in the last game. Mario Mandzukic is also expected to keep his place up front. Marcelo Brozovic may start this game at the expense of Andrej Kramaric. Vedran Corluka us expected to start in the defense for this game.

England: There is no news of any injury from the English management as of now.  Jamie Vardy is also fit for selection alongside Everton goalie Jordan Pickford. Kyle Walker, Dele Alli and Ashley Young are all expected to start in this game. Eric Dier and Fabian Delph remain doubtful to feature in this game. Jordan Henderson has picked up a minor hamstring injury but is expected to be fit by this game.

Croatia’s first-choice right-back Sime Vrsaljko has been ruled out with a knee injury suffered in the win over Russia.
Goalkeeper Danijel Subasic will be monitored after suffering from a hamstring issue in that game.

England manager Gareth Southgate was given a boost when all 23 players in his squad trained fully on Tuesday.

Jamie Vardy is available after sitting out the win over Sweden with a groin problem, while Jordan Henderson has overcome a tight hamstring. 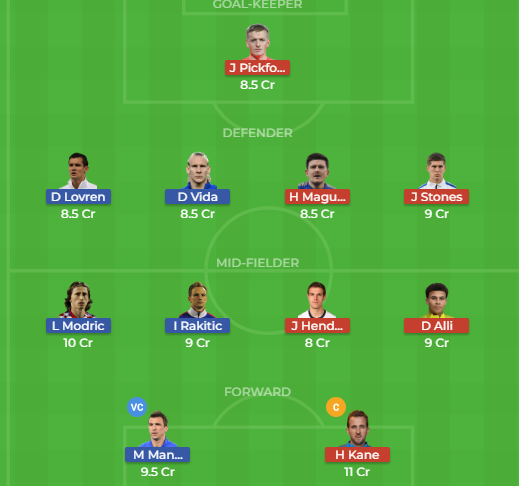 This is the second time the Croatians would be playing in the world cup semi final. The first time they did was in 1998 in France, when they played in the semi final which was also their first world cup appearance. History will be written by either of the  teams who would lift the world cup but our bet is on Croatia for this game because they have been putting in longer hours in the game and they had tough fixtures compared to what England had so far, so it is expected that Luka Modric and company will go to Moscow.

NOTE: THIS CRO vs ENG Dream11 MATCH PREVIEW IS BASED ON OUR RESEARCH AND UNDERSTANDING FROM VARIOUS NEWS SOURCES. YOU CAN SELECT YOUR OWN PLAYING 11 ON THE BASIS OF TEAM NEWS.

THIS CRO VS ENG MATCH PREVIEW IS BASED ON OUR RESEARCH AND UNDERSTANDING FROM VARIOUS NEWS SOURCES. YOU CAN SELECT YOUR OWN PLAYING 11 ON THE BASIS OF TEAM NEWS AND ALL THE OTHER INFORMATION REQUIRED FROM THIS WEBSITE. USING OUR TEAMS IN ANY CONTEST WILL INCREASE THE PROBABILITY OF HAVING THE SAME EXACT TEAM WITH OTHER USERS CAN LEAD TO THE WINNINGS SPLIT.