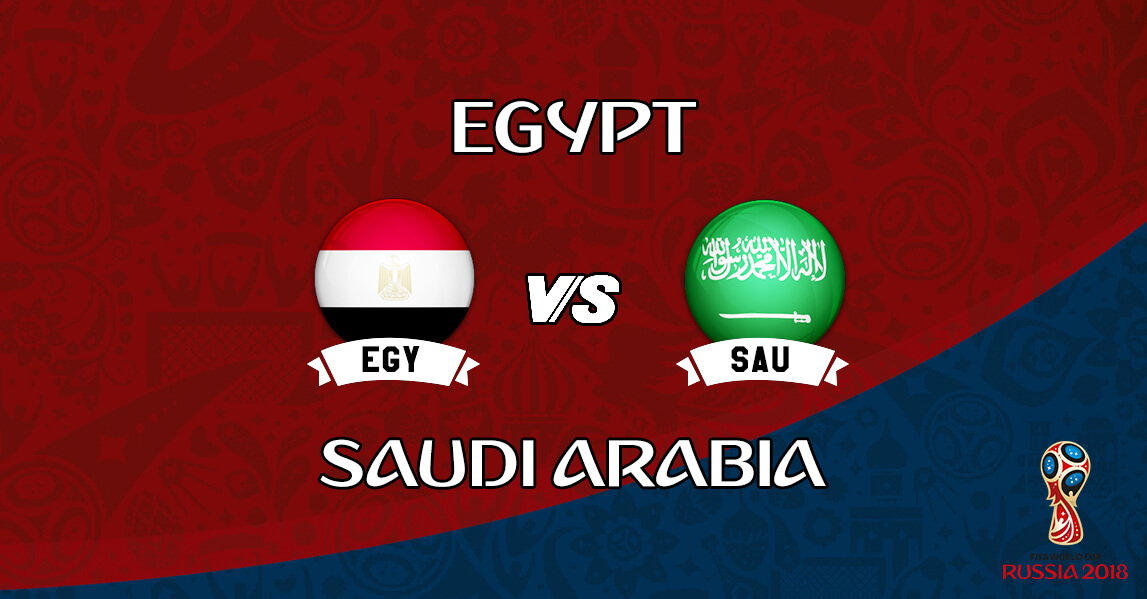 The world cup kicked off with Saudi Arabia, taking the fight to the host nation Russia but it was a frightening evening for them as they conceded five goals in their opening match. Then improved themselves in their next game but Uruguay was too good a team to beat and lost the game to a Luis Suarez goal. With that goal, all dreams of going to the knockout stages for the Asian team were gone. Now they would come into this game facing an equal opponent, equal as in group points and would want to win this game at any cost so that they can go home with something from this world cup.

This match would be a sad one as the newly found football sensation Mohamed Salah will play his last world cup match in 2018 because with two consecutive losses, all hopes are gone and there’s not a single probability in which Egypt can go to the knockout stages. At first there were speculations of Mohamed Salah being able to participate in the world cup. He missed out on the first match as Egypt lost to Uruguay to a last moment goal and then the same fate was handed by the Russians in their second game as they also conceded a own goal in that match. Mohamed Salah, if plays the third match for this country will surely want to show some of his skills and this is the match they should win given the dilapidated condition of the Saudi Arabia.

This FIFA World Cup 2018, Group A, 3rd match is to be played at Volgograd Arena at 1500 hours in Local time. A thrilling game awaits everyone on Match Day 11 for everyone and can be watched live on Sony LIV.

Saudi Arabia: Saudi Arabia is likely to field the same playing 11 that played against Uruguay and it already had five rotations on the team, one of them was the 26-year-old goalkeeper Mohammed Al-Owais who is expected to start in the goal for the Asian nation. Taiseer Al Jassam was taken off the field before half time and is not expected to feature in this game.

Egypt: Mohammed Salah will start in this game against Saudi Arabia in this game. The inclusion of Al Ittihad will be done in the team replacing Marwan Mohsen in the front will be the only change in the team.

A report is emerging from Russia that Liverpool star Mohamed Salah is reportedly considering quitting Egypt national because he is angry about being used as a political symbol while the World Cup squad was based in Chechnya.

So his inclusion is shrouded in mystery. Your call all the way.

For Saudi Arabia, there are no fresh injury concerns and we expect Juan Antonio Pizzi to name a best possible playing11 in this match.

Meanwhile, Mohamed Salah has almost 100% recovered from the shoulder injury, and we expect him to feature in this match.

But we haven’t included the Liverpool forward in one of our teams because of one reason that he could be given an off considering there isn’t much riding on this match.

Also, 45-year-old goalkeeper, Essam El Hadary must be itching to get some game-time under his belt which would make him the oldest player to play in the World Cup. So he could start this game.

NOTE: THIS EGY vs SAU Dream11 MATCH PREVIEW IS BASED ON OUR RESEARCH AND UNDERSTANDING FROM VARIOUS NEWS SOURCES. YOU CAN SELECT YOUR OWN PLAYING 11 ON THE BASIS OF TEAM NEWS.

THIS EGY VS SAU MATCH PREVIEW IS BASED ON OUR RESEARCH AND UNDERSTANDING FROM VARIOUS NEWS SOURCES. YOU CAN SELECT YOUR OWN PLAYING 11 ON THE BASIS OF TEAM NEWS AND ALL THE OTHER INFORMATION REQUIRED FROM THIS WEBSITE. USING OUR TEAMS IN ANY CONTEST WILL INCREASE THE PROBABILITY OF HAVING THE SAME EXACT TEAM WITH OTHER USERS CAN LEAD TO THE WINNINGS SPLIT.