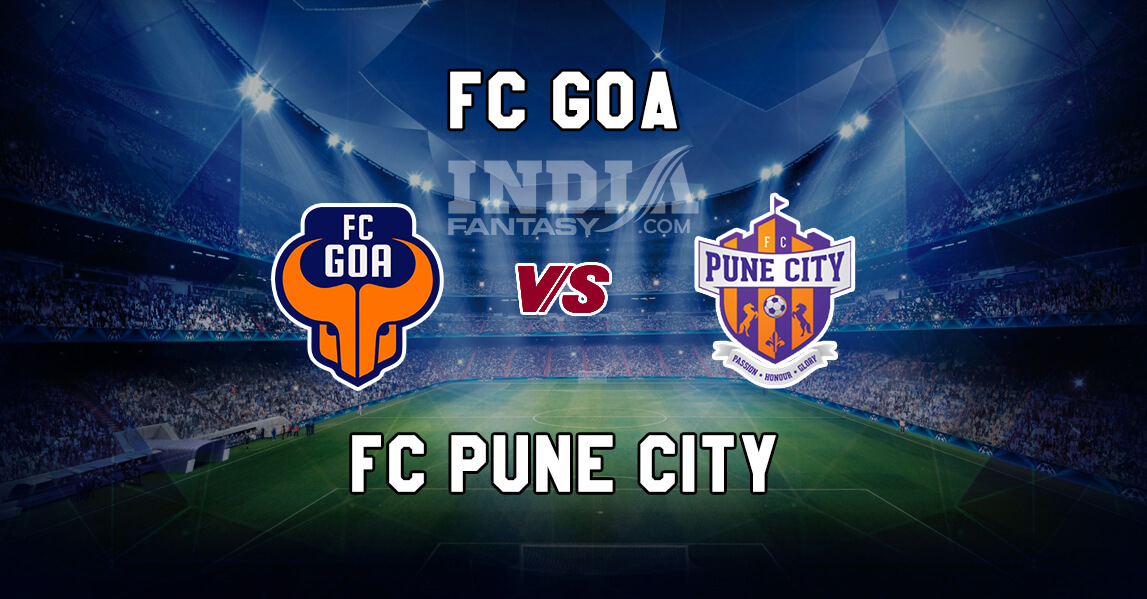 FCG vs FCPC Dream11 MATCH PREVIEW:
FC Pune City will be aiming for the 2nd win on the trot to keep their hopes of making to the Indian Super League playoffs when they host FC Goa in a crunch league match at Shree Shiv Chhatrapati Sports Complex, in Pune, tomorrow on Tuesday evening (IST).

FC Pune City:
FC Pune City ‘s season is out of their hands, to put it simply. Just two wins and 8 points from the first 11 games isn’t a good enough return to go for a tilt at the top-4.

Big things were expected from the Punekars this season after they finished fourth in the 2017-18 campaign. While this season, they are even struggling to finish in the top half of the table. however, they are not out of the playoffs reckoning, not yet. Mathematically, it’s still possible if the results of other matches go in favour of them, and Pune, themselves, go on a winning streak right into the last game of the tournament to take their destiny into their own hands. But there is no room for error now.

Last time out, they managed a close 0-1 win over Kerala Blasters on the road. This was just their 2nd win of the season, but those two victories have come in the last four matches. So the team has a little bit of momentum behind them and it’s all about backing it up with a good showing in this match.

FC Goa:
The Gaurs are coming into this match after enjoying an extended mid-season break in the Indian Super League. They last played their match on November 28, making this period the longest interlude for any team this season. Can there be signs of rustiness from the visitors against a team which won its last match?

Before the break, Goa failed to win their last two matches, losing 1-2 at home against Bengaluru and drawing the last game 0-0 against ATK.

But despite collecting just one point from the last two, Sergio Lobera’s team has enjoyed another strong performance in the league. They are still fourth in the table with 17 points from the nine games, and in all probability, Gaurs can move to 2nd in the table if they manage to win their two games in hand.

FC Pune City:
Injured – FC Pune City don’t have any injury concerns ahead of the match.
Suspended – None
Questionable – None at this moment.

Note: Robin Singh was carrying a knock before the last match, but he played and starred. The 28-year-old Indian player is expected to retain his place.
Key Players – Iain Hume, Marcelo Periera

FC Goa:
Injured – FC Goa have no injury concerns ahead of this match.
Suspended – None.
Questionable – None.
Note: Goa are expected to name the same playing XI which played against ATK in the last match.
Key Players – H. Boumous, B. Fernandes, Corominas

Team 1:
Pune City will no doubt be confident coming into this match after winning the last match. But in Goa will meet a team playing the most attacking an open football in ISL.
The beauty about defender Fall is that he can pop up with the goal, and Mills has been like a rock for Pune.
Bedia and Jahouh represent the best lot of Goa in the middle, while Khan has been more of a ‘Breaker’ and has performed well so far.
At the front, Coro is our captain.

Team 2:
We are backing Pune to show some fight and that’s why there are 3 midfielders in our team from Pune. Marcelo Periera will be leading that pack with Kuruniyan and Khan playing besides him. There are not many changes elsewhere.

INDIA FANTASY PREDICTION:
Pune won the last match, and have the momentum to extend that run to two. While Goa are coming into this match after a long break and could feel jaded.
But the Gaurs possess enough arsenal to strike a hammer blow to hosts.
The away team not to lose.

THIS FCG vs FCPC Dream11 MATCH PREVIEW IS BASED ON OUR RESEARCH AND UNDERSTANDING FROM VARIOUS NEWS SOURCES. YOU CAN SELECT YOUR OWN PLAYING 11 ON THE BASIS OF TEAM NEWS AND ALL THE OTHER INFORMATION REQUIRED FROM THIS WEBSITE. USING OUR TEAMS IN ANY CONTEST WILL INCREASE THE PROBABILITY OF HAVING THE SAME EXACT TEAM WITH OTHER USERS CAN LEAD TO THE WINNINGS.