The defending champions German started the world cup as the second favourites to win the world cup but their poor display of defense against the fast moving Mexicans has left them with many questions as they couldn’t even manage to draw with them, losing to them 1-0 and giving away all the three points. It was a horrible moment when Javier Hernandez, West Ham United, outsmarted Mats Hummels to pass the ball to Hirving Lozano who also took his time without rushing into the shot and struck it in the back of the net of the Germans, stunning football pundits everywhere. This was unexpected from the Germans as they have been the dominating force in the last world cup when they thrashed both Brazil and Argentina in the semi final and final to lift their fourth ever world cup. They need to turn around things if they want to win it for the 5th time because every match from now on is a final for them. One loss and they are kicked out of the world cup.

However, the Swedish, had a great game against South Koreans as they managed to secure the three match points of the game as they broke apart the Korean defense and took things in their own hand. It was a big question how the Swedish team will perform without their star striker Zalatan Ibrhaimovic but they have built themselves up from the scratch and have seemed to like have left the void filled half and if not wholly that was left by Zlatan. Sweden will start this game as the underdogs despite being the team coming with winning points in this game.

This FIFA World Cup 2018, Group F, 4th match is to be played at Rostov Arena at 1900 hours in Local time. A thrilling game awaits everyone on Match Day 9 for everyone and can be watched live on Sony LIV.

Germany: Julian Brandt and Leon Goretzka are expected to start in this game after being impressive coming off the bench. A few changes are expected in the team but it remains to see which player is to be benched because all of them are star players for their team. Mesut Ozil could be one of those players who may start this game from the bench. Marco Reus may get a starting berth in this game. Ilkay Gundogan is expected to replace Sami Khedira in the playing 11. Jonas Hector is expected to start in the defense.

Sweden: Sweden is expected to field the same playing 11 that won against South Korea in their first match and there is no need for any changes to be made in this game. They may add an additional striker in this game to break the German defense early in the game and then shift to a more defensive strategy. Victor Lindelof may start in the back in this game.

Sweden defender Victor Lindelof is expected to start against Germany on Saturday after missing Monday’s 1-0 win over South Korea because of illness. Leeds United centre-back Pontus Jansson is likely to be replaced by the Manchester United defender, who returned to training on Thursday.
Not everything went according to plan for the defending champions, so expect some changes from Germany manager Coach Joachim Low in this match.
Some could be forced like Mats Hummels, who is unlikely to feature after hurting his neck in training. However Low has said that he would be waiting until tomorrow. Antonio Rudiger is expected to fill in if Hummels doesn’t pass the late fitness test. Borussia Dortmund forward Marco Reus is expected to start for Germany, having been on the bench against Mexico. 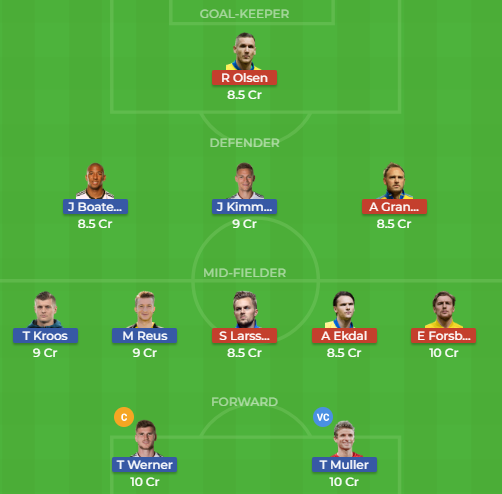 Germany is most likely to come back in this game and register a win because they have not lost back to back games in the same world cup since 1958 and they are most likely to do same. Moreover, if we go by history they have won five out of seven times they have faced Sweden and it is unlikely that it is going to change in this game. Germany will be the winner.

NOTE: THIS GER vs SWE Dream11 MATCH PREVIEW IS BASED ON OUR RESEARCH AND UNDERSTANDING FROM VARIOUS NEWS SOURCES. YOU CAN SELECT YOUR OWN PLAYING 11 ON THE BASIS OF TEAM NEWS.

THIS GER VS SWE MATCH PREVIEW IS BASED ON OUR RESEARCH AND UNDERSTANDING FROM VARIOUS NEWS SOURCES. YOU CAN SELECT YOUR OWN PLAYING 11 ON THE BASIS OF TEAM NEWS AND ALL THE OTHER INFORMATION REQUIRED FROM THIS WEBSITE. USING OUR TEAMS IN ANY CONTEST WILL INCREASE THE PROBABILITY OF HAVING THE SAME EXACT TEAM WITH OTHER USERS CAN LEAD TO THE WINNINGS SPLIT.