Manchester City:
Manchester City’s record-breaking last season and their near perfect dominance in the Premier League means they are slowly but steadily being brought into the same bracket as Juventus, Real Madrid, Barcelona and Bayern Munich. However, the opening day 1-2 loss against Lyon in the Champions League has left the soothsayers rather baffled.

City fans could be blamed for their team’s uncanny performances in Europe. The fans inside the Etihad Stadium continue to boo the Champions League anthem while few showed up for the match against Lyon. However, if any manager in the world could make them embrace this competition, it must be Pep Guardiola.

The Cityzens still remain undefeated in the Premier League. The defending champions won 6-1 against Southampton and after Liverpool could only draw 2-2 against Arsenal, they have a clear advantage at the top of the table.

Shakhtar Donetsk:
Shakhtar Donetsk, on the other hand, continues to overpower domestic teams in the Ukrainian Premier League. They lead the table by a massive 8 points and haven’t lost a league game since August 3, 2018.

However, it’s the Champions League where the difference in the stature becomes visibly wide.

Their passage to the knockout stage looks increasingly unlikely after picking up just two points in the first three matches. The most achievable target would be a 3rd place finish which would guarantee a Europa League participation.

Manchester City:
Injured – Nicolas Otamendi and Ilkay Gundogan are expected to miss this clash.
Suspended – None
Questionable – Terence Kongolo is among the players who could return for Manchester City. Meanwhile right-back Tommy Smith remains a doubt for this match. Also, Rajiv van La Parra and Abdelhamid Sabiri both have returned to training from illness and could feature here in this match.

Note: Manchester City could hand some key players an off day considering the Manchester Derby looms. Gabriel Jesus could benefit from rotation as he finds the playing time hard to come by
Danilo and Riyad Mahrez could also feature after remaining on the bench against Southampton.
Club captain, Vincent Kompany is expected to lead the team.
Key Players – Leroy Sane, Riyad Mahrez

Shakhtar Donetsk:
Injured – None
Suspended – None
Questionable – None 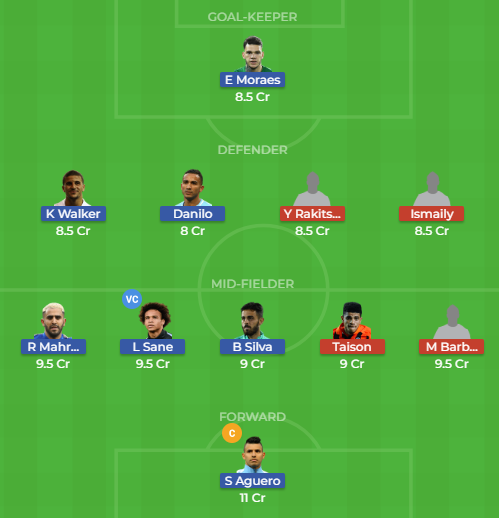 THIS MCI vs SHA Dream11 MATCH PREVIEW IS BASED ON OUR RESEARCH AND UNDERSTANDING FROM VARIOUS NEWS SOURCES. YOU CAN SELECT YOUR OWN PLAYING 11 ON THE BASIS OF TEAM NEWS AND ALL THE OTHER INFORMATION REQUIRED FROM THIS WEBSITE. USING OUR TEAMS IN ANY CONTEST WILL INCREASE THE PROBABILITY OF HAVING THE SAME EXACT TEAM WITH OTHER USERS CAN LEAD TO THE WINNINGS SPLIT.