Manchester United:
Manchester United have a golden opportunity to put behind the negatives of the Premier League match of the weekend when they host Young Boys. A win in this game may prove to be enough for the Red Devils to secure a passage to the knockout stage if Juventus avoid a defeat against Valencia in their match in Turin.

After the out-of-the-blue kind of win over Juventus in the last European game, United have now gone winless in their last two matches, a 3-1 loss against Manchester City and the 0-0 draw vs Crystal Palace. No wonder, the doubters are once again coming for the head for Jose Mourinho and labelling him as a mismatch with United or maybe not good enough at this point.

Those two results in the league, and not to mention the roller-coaster ride of Red Devils all season, the 13-time Premier League Champions are now sitting at a lowly 7th position, a huge 4 points off the pace and 7 points adrift of the top-4.

Definitely United and Mourinho could do with a win in this match to silence the voices for at least a few days.

Young Boys:
The Swiss Champions were always going to be the underdog when their name tossed up alongside with Juventus, Manchester United and Valencia, at the draw ceremony at the start of the season. And they are at the foot of the table with just one point from the first four matches. The visitors are out of the contention for the knockout stage and the best they can hope is a 3rd place finish and qualify for the Europa League. But to be fair, even that looks out of reach for them.

Gerardo Seoane and his men need to win their next two matches and hope Valencia lose their last two to stand any chance to take their European campaign into the second year. But for that, they have to win in Manchester and then beat Juventus in Bern. Too Tough!

Manchester United:
Injured – Defender Victor Lindelof suffered a muscle injury in the 0-0 draw against Crystal Palace and will be out of the action for quite some time now.
Argentine defender Marcos Rojo remains on the sideline for the Red Devils. Also, 19-year-old Portuguese international Diogo Dalot is struggling with fitness issues and may not be involved in this match.
Suspended – None
Questionable – None

Note: Jose Mourinho is expected to ring in some changes to his starting 11 after the draw against the Eagles at the weekend.
Eric Bailly is in contention to start the match after Mourinho claimed last week that he is considering giving Ivorian professional s rare start against the Young Boys, while Phil Jones could start alongside him at the back.
Luke Shaw will definitely come at the left-back after missing the Crystal Palace match through suspension.
Key Players – Pogba, Martial

Young Boys:
Injured – The hosts don’t have any issues for this match as far as injuries are concerned.
Suspended – Sekou Sanogo is suspended after his red card against Valencia last time around.
Questionable – Pedro Teixeira, Jordan Lotomba, Gregory Wuthrich and Guillaume Hoarau all are carrying some knocks and will be assessed ahead of the match.

David de Gea will be the goalkeeper in both the teams because of the simple reason – Young Boys are the underdogs.
Luke Shaw is exoected to start while Mourinho has hinted that Bailly will be given his rare start in this match. Bergen and Mbabu complete our four man defence.
Pogba and Martial will be in the midfield with both also serving as oiur captain and vice captian as well.
Lukaku and Rashford will be leading the attack. 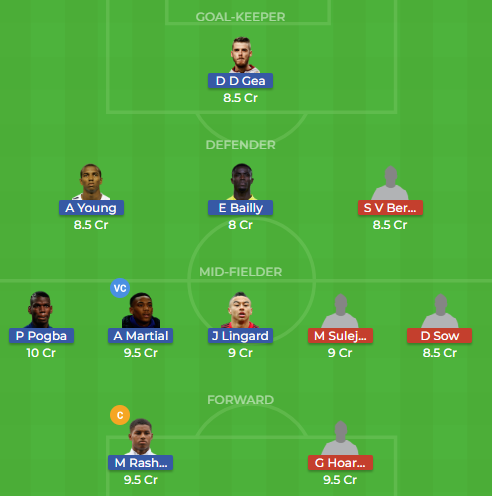 Not many changes at the back, with only young coming in. He used to play as an attacking winger but has been playing as a right-back at United. Attacking instincts never go, by the way.
Lingard joins Pogba and Martial.
Rashford is our captin, and will be supported by Hoarau in the attack. However, Hoarau is a doubt and may not play. But the player is in good form and is worth the risk.

INDIA FANTASY PREDICTION:
This game could have never come at a better time for Jose Mourinho. The former Chelsea manager is coming under a serious pressure with each passing week, and more so after that horrendous and a heartless display against Crystal Palace which left his side at some distance away from the top-4.

So it’s a game where the English team can go out and get their scoring boots back.
A home win is all we can see in this match.

THIS MUN vs YGB Dream11 MATCH PREVIEW IS BASED ON OUR RESEARCH AND UNDERSTANDING FROM VARIOUS NEWS SOURCES. YOU CAN SELECT YOUR OWN PLAYING 11 ON THE BASIS OF TEAM NEWS AND ALL THE OTHER INFORMATION REQUIRED FROM THIS WEBSITE. USING OUR TEAMS IN ANY CONTEST WILL INCREASE THE PROBABILITY OF HAVING THE SAME EXACT TEAM WITH OTHER USERS CAN LEAD TO THE WINNINGS SPLIT.