Genoa:
Genoa spent around a week in Milan for the tough two away fixtures against City’s most famous Football clubs. The visitors ran the red half close in the first assignment as they lost 2-1 against AC Milan, while it seemed as if the players went on to visit the Quadrilatero Della Moda or Galleria Vittorio Emanuele rather than preparing for the next clash as they looked ragged and out of ideas against Inter, losing 5-0 at San Siro.

Those two defeats have punctured their campaign to some degree as they are now winless in five, losing three times in those matches. While Genoa hierarchy reacted by sacking manager Davide Ballardini and appointing Ivan Juric for the 3rd time in the club’s history. It may have been a harsh decision as Genoa were 11th in Serie A but only two points adrift of Sampdoria in fifth. As of now, they are 14th and seven points away from 5th placed Lazio. Clearly, things haven’t turned out as expected.

Napoli:
Napoli will aim to be the leader of the chasing pack when they travel to Genoa. The win will certainly be the only option for Carlo Ancelotti as he aims to topple Juventus for the Scudetto, looking like an impossible task at the moment though.

The Naples are 3rd in the table, level on points with Inter Milan and behind only on goal difference. However, they are further seven points behind Juventus and any slip up could really cost them the slim chances they have right now.

Genoa:
Injured – Genoa will have to tweak their lineup a bit as four of their regulars are definitely out of this match.
Nicolas Spolli, Federico Marchetti, Andrea Favilli and Sandro all have been ruled out through injury.
Suspended – None
Questionable – None

Note: Miguel Veloso has returned to the club for the third time in his career and considering the injury problems that Genoa has right now, he could start from the off.
Key Players – Krzysztof Piatek, Christian Kouamé

Napoli:
Injured – As for Napoli, Vlad Chiriches and Amin Younes both have been ruled out.
Suspended – None
Questionable – Dries Mertens limped off in the champions league match against PSG and will be monitored ahead of the match.

Note: Napoli are unbeaten in the last seven games in all competitions heading into this match. They have also scored in every match but in two all season.
Key Players – Insigne, Hamsik 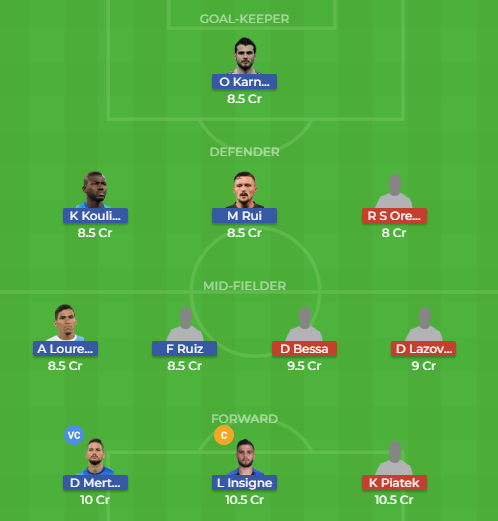 INDIA FANTASY PREDICTION:
Genoa’s recent struggles could be down to the form of Krzysztof Piatek who is failing to emulate his breathtaking start to this campaign. If the Polish striker comes good in this match, Napoli’s unbeaten run could come under a serious threat.
However, even in that situation, Naples are too talented not to win this game against a team currently lacking in confidence.

THIS NAP vs GEN Dream11 MATCH PREVIEW IS BASED ON OUR RESEARCH AND UNDERSTANDING FROM VARIOUS NEWS SOURCES. YOU CAN SELECT YOUR OWN PLAYING 11 ON THE BASIS OF TEAM NEWS AND ALL THE OTHER INFORMATION REQUIRED FROM THIS WEBSITE. USING OUR TEAMS IN ANY CONTEST WILL INCREASE THE PROBABILITY OF HAVING THE SAME EXACT TEAM WITH OTHER USERS CAN LEAD TO THE WINNINGS SPLIT.