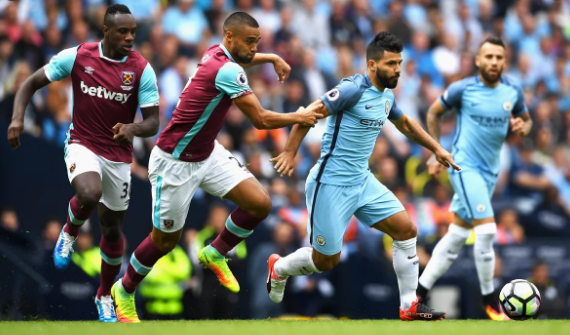 As the English Premier League rolls on, it will be West Ham United that squares off against Manchester City up next. The Hammers are currently in at the 9th spot with seven points and have been resolute in their last three games. Their most recent fixture against Spurs, however, was worth remembering as they came back from three goals to score three in the final 15 minutes. Strangely enough, Manchester City are two spots below them with seven points as well. Nevertheless, they did manage to register an impress 1-0 win over Arsenal and will be keen on going on a run to ensure their authority. Nevertheless, we can expect an entertaining fixture and here is the WHU vs MCI Dream 11 Prediction for the game ahead.

From the last six meetings between the two sides, it’s Manchester City that has been dominant with six straight wins.

Injury Update and Unavailability: Michail Antonio and Sebastien Haller are in doubt to start for their side here.

Expected Changes: Fabianski should be starting in at goal, while, Masuaku, Cresswell, Ogbonna, Balbuena and Coufal are likely to the back four in defence. Fornals, Declan Rice, Soucek and Bowen could accommodate the midfield region. Antonio is expected to lead the line of attack.

Injury Update and Unavailability: Benjamin Mendy, Fernandinho and Gabriel Jesus are ruled out due to injury. Nathan Ake, Aymeric Laporte and Kevin De Bruyne are in doubt to start here as well.

Expected Changes: Ederson should be starting in at goal, while, Kyle Walker, Dias, Eric Garcia and Ake could form the back four in defence. Bernardo Silva, Rodrigo and Phil Foden could feature in at the midfield region. Ferran Torres, Sergio Aguero and Raheem Sterling are expected to lead the attack up front.

Jarrod Bowen can play a pivotal role in the attacking midfield region for West Ham. Bowen has netted three goals and has a pass accuracy of 73.4% from the last five appearances in the league.

Raheem Sterling can be the danger man in the forward line for Manchester City. Sterling has scored two goals, has an assist and also has a pass accuracy of 86.8% from the last four appearances in the league.

Aaron Cresswell has done well while moving forward for West Ham United. Cresswell has three assists and a pass accuracy of 82.8% from five appearances in the league this season.

Kevin De Bruyne can has been quality in the midfield region for Manchester City. The 29-year-old has a goal and an assist to his name from the last three appearances. He also has a pass accuracy of 79.4% in the process. He can be added to the WHU vs MCI Dream11 Prediction side.

West Ham United may have been going through a good run of form lately, but they could face some problems against a power packed Manchester City unit. With that being said, the WHU vs MCI Today Match Prediction odds are in favour of Manchester City to get the win.