CON vs LVA Dream11: The WNBA scene is into the Final and we are not far away from seeing who will lift the championship. The Playoffs lived up to their billing with a bunch of close games but the ride will soon be over. In the Game 3 of the Finals, the Las Vegas Aces will look to fend off Connecticut Sun in what can be the final game of the season.

During Game 2, the Aces made it clear that they have a set agenda in their profile. They want to win the title. They defeated the Sun 85:71 as A’ja Wilson stormed 26 points, while Chelsea Gray and Kelsey Plum also hit the 20 points mark. This was one of their best wins in the Postseason as they dealt a blow on both ends of the floor. Will this mean that they will lift the trophy here or will the Sun come up with an unprecedented run here?

The Sun has had issues with multiple shooting cold from the field. In the last game, while Alyssa, Jonquel, and Courtney picked up the slack, Hiedeman and Bonner combined for 1 of 12 shots. The team’s familiar three-point woes continued as they made just three of the long-range shots. They were aggressive all night but the Aces continued to shower misery in the first and third quarter, where they have made most of their damage.

For the Aces, the long-range shooting wasn’t particularly on, but Wilson’s inside game kept them humming while Plum recovered from a poor shooting night, which was the decisive factor. The bench continued to be a non-factor but that doesn’t matter when your starting group is this loaded. The Aces have certainly elevated their defensive play and look in brilliant touch right now. They are not letting the Sun get anything going and have identified the style that can counter Sun’s physicality? Will the Aces win the title in this game? Highly likely.

*Stats from last Game 2*
Alyssa Thomas(CON)
Points: 13
Rebounds: 03
Assists: 04
Steals: 02
Thomas’ inside game and the unorthodox push shots have been a factor but she hasn’t been effective enough to bury the Aces thus far. I expect a 12-17 points, 6-10 rebounds, and 4-7 assists range here.
Expected Fantasy Points Range: 40-60

Chelsea Gray(LVA)
Points: 21
Rebounds: 03
Assists: 08
Steals: 03
Guard Gray has drunk some type of offensive potion it seems and continues to pour in points night after night, shooting 9/16 in the last game. I expect her to be in 18-25 points and 5+ assists here.
Expected Fantasy Points Range: 28-40

Jonquel Jones(CON)
Points: 16
Rebounds: 11
Assists: 03
Jonquel continued to be a factor in the last game and has given strong rebounding and much-needed scoring, however, it is not the same Jonquel who was scoring 20 or so each game. I expect a 12-18 points, 7-11 rebounds, and 1-2 blocks range.
Expected Fantasy Points Range: 30-41

A’ja Wilson(LVA)
Points: 26
Rebounds: 10
Assists: 00
Blocks: 01
With Wilson in their back pocket, the Aces can put on a show against any squad and have relied heavily upon her post-production, rebounding, and defense. I expect her to be in 20+ points, 10+ rebounds, and 1-3 blocks range. She can be selected as a Star/Pro Player in the Dream 11 Prediction scenario.
Expected Fantasy Points Range: 40-58

Courtney Williams(CON)
Points: 18
Rebounds: 02
Assists: 05
Blocks: 01
While Courtney has had some off shooting nights, she was big-time in the last game, using her pure shooting stroke to generate offense. I expect her to be in 11-16 points and 2-4 assists range.
Expected Fantasy Points Range: 19-34 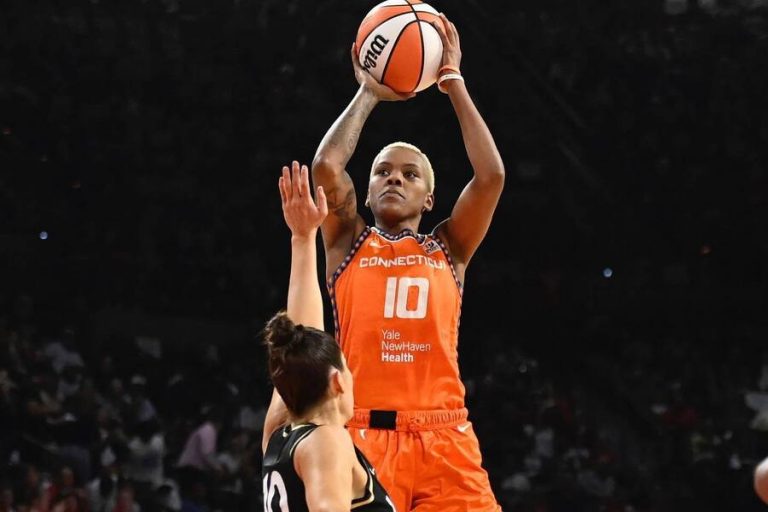 Will the Aces continue their five-game winning streak and lift the ultimate title in the WNBA or will the Sun showcase one more gasp here? This match is available on the WNBA League Pass, an App/web service for all the live games and their replays if you can’t watch the game. To view the highlights, visit the official YouTube channel of the WNBA. To learn the scores, news, and stats, visit the official website of the WNBA.