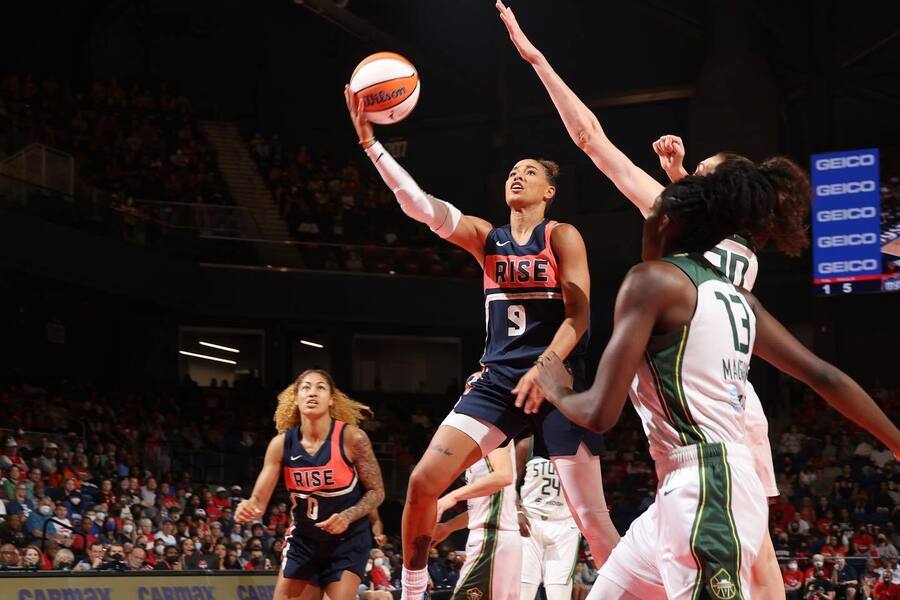 SEA vs WAS Dream11: The WNBA Playoffs threw a curveball when the Liberty defeated Sky in what was a big upset. Thus, you never know if we have more surprises, however, there are some seedings so close that the matter of upset is far. And that is the case when the Seattle Storm will take on the Washington Mystics.

Both teams won 22 games and lost 14, and while that may not give them elite status considering they finished fourth and fifth, they are a tough bunch to deal with. The Storm has been graced with the MVP performer Breanna Stewart while Elena Della-Donne can herself make a huge claim for the MVP, considering how the team was only keeping afloat without her.

Storm and the Mystics met thrice during the season and Mystics won two of these battles.

What a great match-up!

The marquee match-up here is surely between Forwards Elena Della-Donne and Breanna Stewart. With Elena, the Mystics won 18 of 25 games while without her, they won just four and lost seven games, which says a lot itself. That could have been the case even with the Storm, a team highly dependent upon Breanna. Both of these players are amazing both off-the-ball and off-the-dribble.

In terms of guard match-ups, Jewell Loyd is the trump card as a scorer for Storm whereas Cloud and Atkins have been doing their both ends. Loyd has had a tough season but finished on a high and forms a nasty backcourt alongside incredible passer Sue Bird. Shakira Austin will have her hands full containing Tina Charles in the middle and this is where the Storm can extract a big advantage. In terms of the bench, the teams are equally matched but Myisha Hines-Allen can act as the trump card for the Mystics.

Breanna Stewart(SEA)
Forward Breanna has been in a great form once again and there is no stopping her. She averaged 21.8 points a game to lead the league, led the Storm in rebounding with around 7.5 rebounds a game, around 3 assists a game and around 1.6 steals a game to lead the team. I believe she will be in 20+ points, 7-10 rebounds, and 1-2 steals range. She can be selected as a Star/Pro Player in the Dream 11 WNBA Prediction scenario.
Expected Fantasy Points Range: 38-50


Elena Della-Donne(WAS)
Without Elena, the Mystics could have been on the fringes of the Playoffs. She averaged around 17 points, 6 rebounds, and 1 block a game. She can be a high difference-maker here and can be in 16-23 points, 5-8 rebounds, and 1-2 blocks range.
Expected Fantasy Points Range: 30-41


Jewell Loyd(SEA)
Loyd almost buried 40 points in the last Regular Season game but as a whole, she had a rather on-and-off season. She still managed to average over 16 points a game.
Expected Fantasy Points Range: 25-35


Natasha Cloud (WAS)
Cloud averaged 7 assists a game and led the league in that category. Cloud can also give strong scoring with around 11 points  a game. She is an elite defender and can be in 10-15 points, 6-9 assists, and 1-2 steals range.
Expected Fantasy Points Range: 24-34


Tina Charles(SEA)
Center Charles has brought great scoring and rebounding for the Storm, averaging around 12.6 points and 7.4 rebounds a game. She can be huge in the Playoffs.
Expected Fantasy Points Range: 22-32 Ariel Atkins(WAS)
Guard Atkins is a talented player on both ends and had another strong season, averaging around 14 points a game. She can be a catalyst of something special here and can be in 16-22 points and 3-5 assists range.
Expected Fantasy Points Range: 20-34

SEA vs WAS DREAM11 LINEUP BALANCERS

SEA vs WAS Dream11 Team These two finished with the same record, so who will create separation in Game 1 here? You can watch this game on the WNBA League Pass where all the WNBA action can be seen. You can catch the highlights of the game on the official YouTube of the WNBA. To learn the scores, news, and stats, visit the official website of the WNBA.