AUS vs SA: Why is Josh Hazlewood Not Playing Today’s Australia vs South Africa 2nd Test? 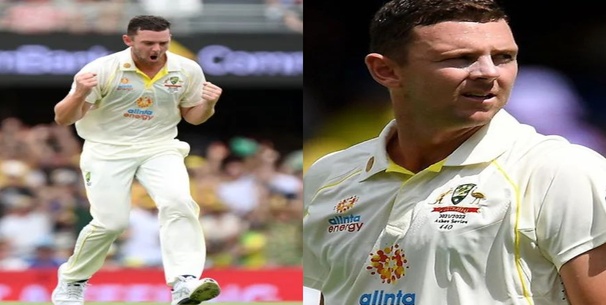 Josh Hazlewood AUS vs SA: In a crucial news development, Australia’s senior pace bowler Josh Hazlewood is unfortunately not available for selection in the ongoing second Test match against South Africa being hosted at the Melbourne Cricket Ground in Melbourne. Australia defeated South Africa by a margin of 6 wickets during the first Test match on a pretty difficult pitch for batsmen. The hosts have now taken a 1-0 lead in the three-match Test series.

AUS vs SA: Why is Josh Hazlewood Not Playing Today’s Australia vs South Africa 2nd Test?

Australia will be playing their third Test match in a row this year without their premier fast bowler Josh Hazlewood who has still not recovered from a side strain. He was out with injury during the final Test match against West Indies and also did not play the opening game against South Africa. Hazlewood has picked up as many as 217 wickets from 58 Test matches at an average of 26.17 that includes a total of 9 five-wicket hauls and seven four-wicket hauls. However, Australia have filled the space with Scott Boland in the side and the right-arm pacer has bowled really well whenever he has got an opportunity to represent the national team.

“We gave Joshy (Hazlewood) every chance, (but) it just got to a stage where (he) more than anyone else felt like he was a little bit underdone,” Australia captain Pat Cummins told reporters on Christmas morning.

“It’s a mark of the man really, he himself said ‘don’t feel quite right’ so he kind of pulled himself out of selection. We talk a lot about how (as) a team we need a squad mentality and I think it’s another great example,” he added.

"It's a mark of the man really, he himself said 'don't feel quite right' so he kind of pulled himself out of selection" – Pat Cummins on Josh Hazlewood #AUSvSA https://t.co/CMg8EQc1Dv

A cricket maniac who lives his life like a T20 match, time is short so make the most of it. Always thriving to learn more about cricket writing and obviously being an Indian, a big cricket expert.
Previous ArticlePakistan vs New Zealand 1st Test: Karachi Pitch Report, Team Records at National Stadium
Next ArticleIndia Upcoming Matches: List of India Cricket Schedule in 2023