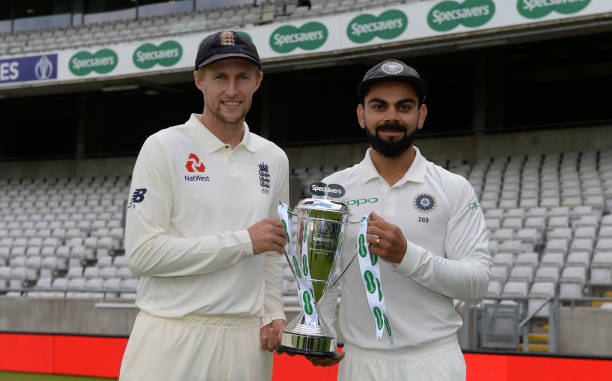 ENG vs IND Stats : England and India will face off each other in a five match Test series starting at Trent Bridge, Nottingham from August 4. With this series the second edition of World Test Championship will also begin so both the sides will take it very seriously and it will be a tough challenge for them. Earlier both the sides played four Tests series in India in Feb-March which India won by 3-1 and now English side will be eyeing their revenge while team India will look to clinch their first Test series win on England soil since 2007. Both the teams have many fine players and if they come good then it’s going to be an exciting series. The likes of Joe Root, Virat Kohli, R Ashwin, James Anderson, Jasprit Bumrah etc will have to give their best to win games for their respective sides.

England and India’s Test rivalry began in 1932 which was also India’s first ever Test and their rivalry has been amazing for a long time and till now they have played 126 Tests against each other. In the starting years England dominated most but over the years team India too have emerged a strong side and now they have a team who can win series in England as well.

ENG vs IND in Test Cricket :

As we have already told England and India played first Test against each other back in 1932 and till now in 89 years they have played total 126 Tests in England and India and here are their head to head record in the longest format of the game.

ENG vs IND in England :

ENG vs IND in India :

ENG vs IND at Neutral Venues :

England and India haven’t played any Test against each other at neutral venues yet.

England in Test Cricket Since January 2016 :

England currently ranked fourth in ICC Test Team Rankings, have progressed a lot in limited overs cricket in the last five-six years but in Test cricket they have been average with some good performances here and there. Even though at home they lost only one Test series at home but they couldn’t whitewash average teams and away from home they got hammered in all countries except in Sri Lanka and South Africa and their performance in Australia, West Indies, New Zealand and India have been abysmal and here are their numbers in Test cricket in last 5 years.

England in Test Cricket Since January 2016 :

India in Test Cricket Since January 2016 :

Team India who are sitting at second position in the ICC Test Team Rankings have been the best Test side for the last 5-6 years and they have been unbeatable at home and have won Tests away from home as well with two back to back Test series wins in Australia and now they will be eyeing a historic series win in England as well and here are their team numbers in Tests since January 2016.

India in Test Cricket Since January 2016 :

England and India have a lot of Test matches against each other in the last six-seven years. England is dominating in England while India is dominating in India so both the sides have been good at their respective home but away from home they couldn’t maintain the consistency and this time they will be thinking to change this equation and team India will have to give their best to clinch a series on England soil and here are their last five Tests result against each other.

England have an average batting line up at present as apart from Joe Root none of their batsmen are consistent run scorer and most of them are also young. The absence of Ben Stokes has further weakened them and now whole batting reliability will be on Joe Root, Jos Buttler and Rory Burns and the likes of Zak Crawley, Ollie Pope, Dan Lawrence etc have a good opportunity to show their talent.

England Batsmen vs India in Tests :

England have a strong bowling line up for home conditions. Stuart Broad and James Anderson have a lot of experience and this duo will be key for them and the likes of Sam Curran, Ollie Robinson, Mark Wood, Craig Overton are there to support them. In spin Jake Leach and Dominic Bess are there but it’s fast bowling who will decide the fate of this series.

England Bowlers vs India in Tests :

India have a good batting unit in Rohit Sharma, Cheteshwar Pujara, Virat Kohli, Ajinkya Rahane, KL Rahul, Rishabh Pant, Ravindra Jadeja and Hanuma Vihari and all these guys have experience of playing in England and they need to perform in a unit and here are their numbers against England.

India Batsmen vs England in Tests :

India’s bowling department is pretty good as they have swing bowlers in Ishant Sharma and Mohammed Siraj. Mohammad Shami and Jasprit Bumrah are pretty good with their pace and bounce and then in spin the duo of R Ashwin and Ravindra Jadeja will be the key and the recent form of R Ashwin has been good in England as well.

WI vs PAK : Azam Khan ruled out of two T20Is against West Indies

Just yet another sports fan who likes to help people in cricket and football fantasy teams, a part time amateur statesman and also a bollywood and tollywood fan!!!
Previous ArticleWI vs PAK 3rd T20I: Possible Playing 11 of Pakistan
Next ArticleFittest Cricketer in the World: Top 3