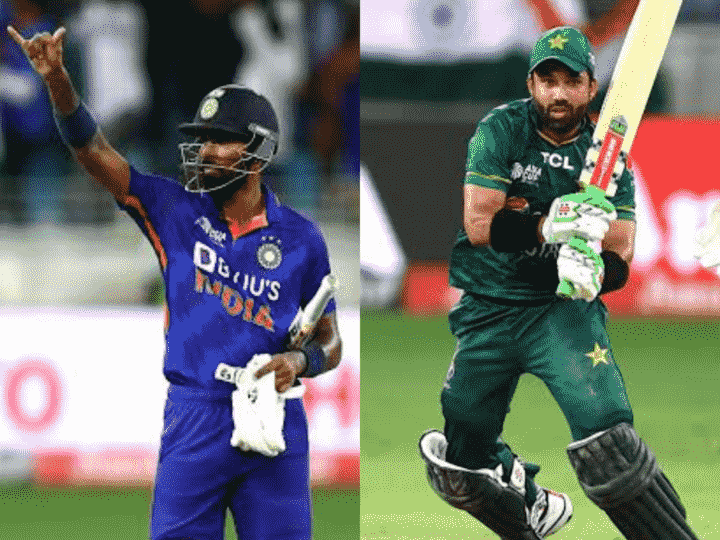 It wasn’t quite India’s night in Dubai yesterday (Sunday, September 4) as the side had to endure a defeat against their arch-rivals Pakistan by five wickets. It was a Super 4 stage game of the ongoing T20 Asia Cup 2022 and India are now placed at third position in the points table without any credit in their account.
Rohit Sharma-led Indian men had to bat first as Babar Azam won the toss and elected to bowl first. Chasing a target of 182, Pakistan opener and wicketkeeper batter Mohammad Rizwan played a fabulous knock of 71 runs in 51 deliveries with six fours and a couple of sixes. All-rounder and the ‘Player of the Match’ of the last night’s clash Mohammad Nawaz too, aided Pakistan with his crucial and rapid bash of 42 runs in 20 deliveries with six fours and two sixes. In the end, Asif Ali’s tiny cameo and Iftikhar Ahmed’s winning hit sealed a victory for Pakistan by five wickets and a ball to spare. Every Indian bowler including, Bhuvneshwar Kumar, Arshdeep Singh, Ravi Bishnoi, Hardik Pandya, and Yuzvendra Chahal picked a wicket.
The neighbors are still expected to lock horns once again in Dubai on September 11. It will be their third meeting in the tournament considering the first one on August 28 where India overcame Pakistan by five wickets.
India and Pakistan are placed alongside Sri Lanka, the table toppers as of today (September 5), and Afghanistan in the round-robin format of the Super 4 stage. However, the two sides are prone to finish as the top two to assemble one more Sunday blockbuster.
Sri Lanka and Pakistan have won their only games, which, eventually means India will have to win their remaining two matches against Sri Lanka (September 6) and Afghanistan (September 8). Moreover, India winning both of their derbies will eliminate Afghanistan from the race to the Asian title.

If India win their remaining two matches and Pakistan beat Sri Lanka, the Lankan men will be knocked out of the tournament. However, if Sri Lanka win their next couple of games, the Net Run Rate (NRR) will play a huge role.
India ought to win their remaining two games with large margins to qualify for the ultimate clash. Currently, they have an NRR of -0.126 with Sri Lanka (+0.589) and Pakistan (+0.126) being ahead in the battle with two points each.

After Pakistan’s attainment on Sunday, Rizwan said that his teammates had spoken about the India-Pakistan challenge being a “best of three-match series” between the foes. The political strain has led to a halt in bilateral contests between the two countries for about a decade now.

“Fans from both countries anticipate the third meeting in next week’s final. We have jokingly said among ourselves that it’s a best of three-match series (between India and Pakistan),” said Rizwan.

Besides, India earlier posted a fairly defendable total of 181 runs with a fifty-run-stand between the openers Sharma and KL Rahul. Furthermore, Virat Kohli hit another vital knock of 60 runs in 44 deliveries with four boundaries and a six. This was Kohli’s second fifty of the competition so far, hinting at an outstanding revival of the 33-year-old.
It was possibly one of the most dramatic conclusions ever, as Bishnoi secured eight runs off the final two deliveries of the first innings amid Fakhar Zaman’s poor fielding in the deep. In the meantime, Pakistan’s Shadab Khan captured two wickets for his side.