IND vs SA: Who won India vs South Africa 1st ODI? Check the winner of Man of the Match Award 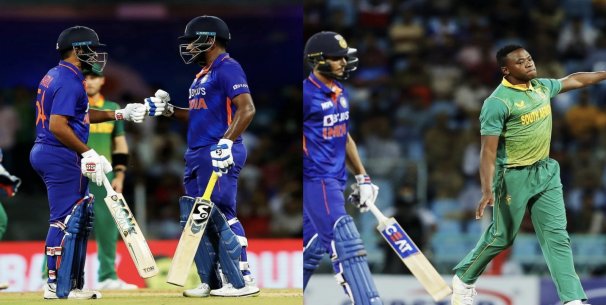 IND vs SA: After an exciting end to the T20I series, India and South Africa faced each other in the ODI series. The first game took place on Thursday (6th October). It was a rain-curtailed game that saw only 40 overs being bowled by one side and it was Proteas who displayed a great performance with both bat and ball and took a 1-0 lead in the series.

IND vs SA: South Africa thumps India by 9 runs to take a 1-0 lead in the series

After a long wait due to rain, the fans finally witnessed the game. Indian skipper Shikhar Dhawan won the toss and asked the opposition to bat. Although Indian pacers didn’t take any wickets early it was a decent bowling effort as they didn’t leak runs.

Shardul Thakur then chipped in with the ball and took two wickets to return with the figures of 2/35. Two leg-spinners Ravi Bishnoi and Kuldeep Yadav also took one wicket each but it was Heinrich Klaseen (74*) and David Miller (75*), who produced a superlative effort with the bat and helped their side post a total of 249 after a slow start.

Chasing the target, India had a poor start as they lost wickets in clusters with Shikhar Dhawan (4), Shubman Gill (3), Ruturaj Gaikwad (19) and Ishan Kishan (20) back in the hut for just 51 runs. However, after that Shreyas Iyer played a counter-attacking inning and smashed 50 runs in just 37 balls to bring India back into the game.

After Iyer’s wicket, Sanju Samson and Shardul Thakur added 93 runs partnership to keep their side in the hunt. But in the end, it was too much. With 30 runs needed off the last over, Samson tried his best but could manage only 20 in that over with the score of unbeaten 86 runs.

Tabraiz Shamsi, who bowled the last over held his nerve well and helped his side bag a 20-run victory in the first game to take a lead of 1-0 in the series.

IND vs SA: Who Won Man of the Match in the first ODI between India and South Africa

South African wicketkeeper batter Heinrich Klaseen was awarded Player of the Match in the first ODI between India and South Africa. The right-hander played a sensational knock of unbeaten 74 runs in 65 balls that helped his side post a total of around 250.

Klassen came to bat when South Africa was tumbling at 71/3. It didn’t seem that would post around 200 runs. But his innings gave his side a much-needed momentum. His knock was laced with 6 fours and 2 sixes.