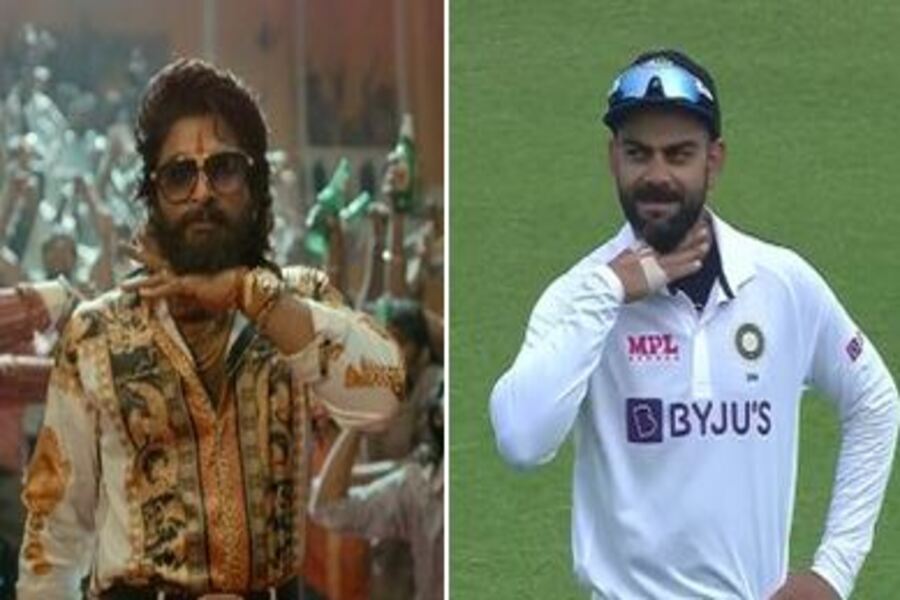 Virat Kohli Pushpa Celebration: The dialogues and dance steps of Telugu Film Pushpa has certainly become quite famous among the public and cricketers as well. The international cricketers like Dwayne Bravo and David Warner have posted the hook steps and delivered dialogues in the form of reels in social media. The latest to catch up the trend is Virat Kohli.

The Indian team secured an outright win against Sri Lanka in 1st fixture of 2-match test series at Mohali. It was also the 100th Test of former Indian captain Virat Kohli, who was given guard of honour by the team and he celebrated it in fine style as well. In the first innings, he scored 45 off 100 balls and was impressive in his performances. Here is the video of the celebration by Virat Kohli during the test match.

Related: Highest Score for India at each batting Position in Test

Virat Kohli was seen imitating Allu Arjun’s iconic gesture from the movie, Pushpa, which has gone viral on the internet. He has certainly been a crowd puller since his debut, and was quite active in interaction with the people on the stands in the 100th test as well. While, the all rounder Ravindra Jadeja has also been seen emulating the same during the limited overs series against Sri Lanka last month.

The Indian team was terrific in their all round performances to win the 1st Test of the home test series against Sri Lanka by an innings & 222 runs. The best performers for the team were Ravindra Jadeja and Ravichandran Ashwin. This dominating performance helped the team to climb to 5th position in the World Test Championship Table.

In a total of 10 Test matches in WTC 2021-23 Cycle, India have secured victory in 5 of them, while losing 3 and 2 fixtures ending as a draw. Although the team has most points, but they have played the most series (4) and lack in terms of winning percentage.