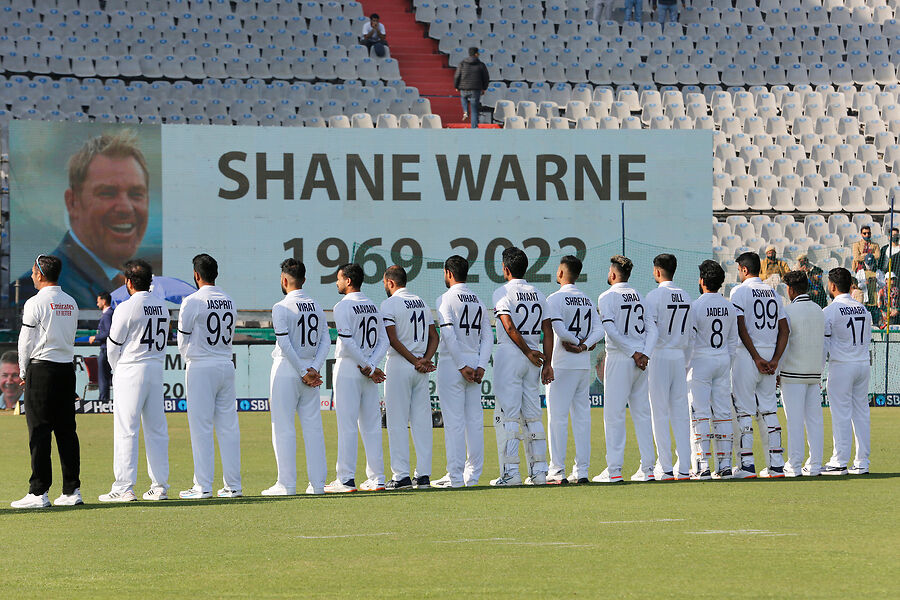 IND vs SL: Sri Lanka have lost all the 3 T20Is very badly and they have started the test series on a rather disappointing note as well. The first test kickstarted yesterday in Mohali which also turned out to be the hundredth test match for the former Indian captain Virat Kohli. On the start of 2nd day, Indians were seen with black armbands.

IND vs SL: Why are India Players Wearing Black Armbands?

One of the greatest spinners and the best wrist spinner in the history of cricket in Shane Warne passed away due to cardiac arrest in Thailand on 4th of March, on the previous day, another Australian great in Rod Marsh passed away and as a mark of respect, Indian players are wearing black armbands on day 2 of the first test.

A minute of silence was observed before the start of play as well to show their condolences for the loss of the legend.

A minute’s silence was observed before the start of play on Day 2 of the first Test for Rodney Marsh and Shane Warne who passed away yesterday. The Indian Cricket Team will also be wearing black armbands today.@Paytm #INDvSL pic.twitter.com/VnUzuqwArC

Shane Warne made his debut in 1992 against India in Sydney cricket ground and retired in 2007. He was one of the greats of the game who revolutionized the art of wrist spin. There were so many iconic moments in his cricket career but none better than his deliveries to Mike Gatting and Andrew Strauss.

Top 11 biggest spinning balls by @ShaneWarne . From the famous ones to the likes of Gatting, Strauss, Chanderpaul, Anwar etc to some near forgotten ones – this clip is nothing but pure magic.

Most double centuries in test cricket

First captain/coach to win the IPL

Shane Warne was a magician with the ball in hand. But he was also one of the most shrewd tacticians the game has ever seen. The fact that he didn’t get an opportunity to captain his country is a great loss for Australia. He was so ahead of his time which was visible in his captaincy in the inaugural edition of IPL in 2008.

The way he managed Ravindra Jadeja and Yusuf Pathan, the all rounders, in that edition for Rajasthan Royals was extremely visionary when T20s were still a game that was under development.

Taking the life out of me is better than taking cricket from me. Welcome to my world which gives nothing but happening stories in the cricketing world
Previous ArticlePK-W vs IN-W: Possible India Women Playing 11 for Match 4 of Women’s World Cup, Players Stats for Today’s Dream11 Team Prediction
Next ArticleIND vs SL: Ravindra Jadeja SWORD Celebration in 1st Test – WATCH