India vs England: After missing out on a wonderful chance to take a crucial series lead, Team India have started strongly in the ongoing second Test against England. The host England team captain Joe Root once again won the toss and this time elected to field first.

After losing the toss and being put to bat first under overcast conditions, India got off to a outstanding start with the opening duo of Rohit Sharma and KL Rahul coming out unbeaten in the first session. India registered their first-ever century opening partnership away from home since 2017. Senior batsman Rohit was looking in an amazing form having notched up a brilliant fifty and even set for a big hundred. But veteran pacer James Anderson once again brought his experience into play as he bowled a peach of a delivery to dismiss the stumps of the Indian opener and provide England with the first breakthrough of this second Test.

Related: India Go Wicket-less in the Opening Session on Day 1 of 2nd Test

However, Rohit Sharma composed a wonderful innings of 83 runs that consisted of 11 fours and 1 six. After a fabulous 97-run partnership in the first Test, the Indian openers have once again fought hard to put up a record 126-run stand in this 2nd Test match and have given a solid foundation at the top.

Related: India Lose Wickets of Rohit and Pujara Before Tea on Day 1 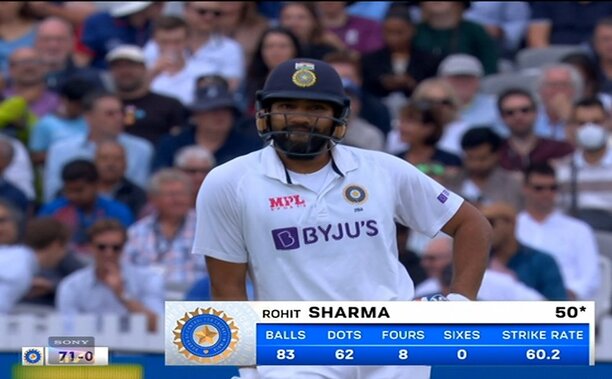 Related: Why is Stuart Broad Not Playing 2nd Test?

After Stuart Broad getting ruled out for the remainder of the Test series, there was a big question mark over James Anderson’s availability for the second Test against India. However, the third highest wicket-taker in Test cricket has shown his class after he dismissed Cheteshwar Pujara ninth time in the longest format of the game. After a poor outing in the first innings of the Nottingham Test, Pujara once again disappointed with the bat getting out for just 9 runs.

A cricket maniac who lives his life like a T20 match, time is short so make the most of it. Always thriving to learn more about cricket writing and obviously being an Indian, a big cricket expert.
Previous ArticleThe Hundred: Smriti Mandhana, Harmanpreet Kaur to miss the remainder of the competition
Next Article5 Cricketers Who Battled Depression And Made A Strong Comeback