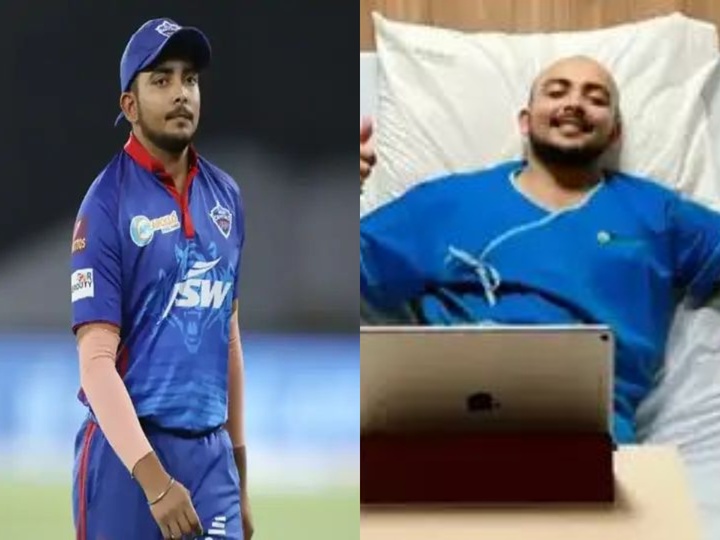 Prithvi Shaw MI vs DC IPL 2022: It is currently a very pressure situation for the Delhi Capitals (DC) in the ongoing Indian Premier League (IPL 2022) season. After having won two matches in a row for the first time in this edition of the T20 tournament, Delhi Capitals are currently placed at the fifth position on the points table with as many as 7 victories and 6 defeats alongside a positive Net Run Rate of (+0.255). The Rishabh Pant-led team now have to win their last league match against Mumbai Indians on 21 May, 2022 (Saturday) at the Wankhede Stadium in Mumbai to qualify for the IPL 2022 playoffs.

The Delhi Capitals will definitely be feeling high on confidence having grabbed the winning momentum but they have been without their star opening batsman Prithvi Shaw during the last 4 matches. The DC opener was first admitted to a hospital where he was being treated for typhoid disease. But he was then discharged from the hospital and also returned to the team hotel ahead of the last game against Punjab Kings. However, there is still no clear update from the Delhi Capitals camp regarding Shaw’s availability.

Prithvi Shaw is very much unlikely to be available for the penultimate game against Mumbai Indians on Saturday. Earlier both DC head coach Ricky Ponting and Assistant Coach Shane Watson had already mentioned that it will be really difficult for Prithvi to feature in the remainder of the tournament.

“Delhi Capitals opener Prithvi Shaw has been discharged from the hospital where he was being treated for a bout of typhoid. Shaw has returned to the team hotel where he is currently recuperating, while being monitored by the DC medical team,” said an official statement from Delhi Capitals.

Delhi Capitals opener Prithvi Shaw has been discharged from the hospital where he was being treated for a bout of typhoid. Shaw has returned to the team hotel where he is currently recuperating, while being monitored by the DC medical team. pic.twitter.com/EMJ5NACqpP

In the absence of Prithvi Shaw, the Delhi Capitals are very much likely to pick the same winning combination from the last match against Punjab Kings. This also means that Sarfaraz Khan will get another opportunity at the top after his aggressive 32 runs off 16 balls during the previous game.

A cricket maniac who lives his life like a T20 match, time is short so make the most of it. Always thriving to learn more about cricket writing and obviously being an Indian, a big cricket expert.
Previous ArticleSRH vs PBKS IPL 2022 Dream 11 Prediction, SRH Playing 11, PBKS Playing 11 Sunrisers Hyderabad vs Punjab Kings Dream11 Team for Today’s Match
Next ArticleIPL 2022 MI vs DC Prediction – Match 69 | Who will win Mumbai Indians vs Delhi Capitals Dream11 Prediction for today’s IPL match, Fantasy Cricket Tips