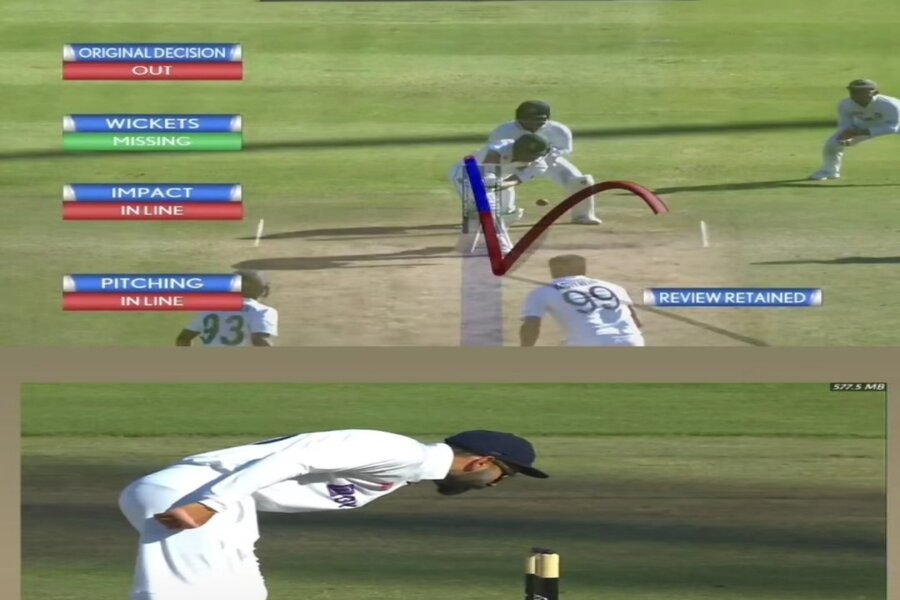 ANGRY Virat Kohli Talking to Stump Mic: The third and final Test match between South Africa and India is currently in a very gripping position at the Newlands in Cape Town. On the back of a sensational century from Rishabh Pant under pressure in some really challenging batting conditions, Team India have posted a fourth innings target of 212 runs for the home side. In reply, South Africa are in a very good position to win this Test match and the series as well.

In a massive moment of the game, South African skipper Dean Elgar found a lucky reprieve through a successful Decision Review System (DRS) when he challenged a LBW decision off a beautiful delivery from Ravichandran Ashwin. The on-field umpire gave it out but the replays showed that the ball was actually missing the stumps. All the Indian players including captain Virat Kohli looked really angry and disheartened with that decision. Kohli was even seen venting out his anger at the stumps as he pointed out that the on-field cameras should also come into play when the home team is shining the red ball.

“Focus on your team as well as they shine the ball eh not just the opposition, trying to catch people all the time,” Virat Kohli was caught saying on the stump mic.

South Africa started off Day 3 on a remarkable note by dismissing the senior India batting duo of Cheteshwar Pujara and Ajinkya Rahane in the first two overs itself. However, after that massive setback, wicket-keeper batter Rishabh Pant showed phenomenal temperament under pressure adding an important 94-run stand with skipper Virat Kohli. Pant continued to play his natural attacking game while the visitors kept on losing wickets on the other hand. Eventually, Pant played a staggering unbeaten innings of 100 runs off 139 balls that included 6 fours and 4 sixes, that was surely one of the greatest innings by an Indian batter on the South African soil, but India got bowled out for 198 runs. For South Africa, Marco Jansen once again bowled brilliantly picking up four wickets while the duo of Kagiso Rabada and Lungi Ngidi also finished with three scalps each.

In the fourth innings of the Test match, South Africa did not had the best of starts as Aiden Markram once again threw his wicket after getting a fine start of 16 runs. However, the duo of captain Dean Elgar and Keegan Peterson then batted amazingly well to put the visitors under pressure putting on an excellent partnership of 78 runs for the second wicket. South Africa ended Day 3 at 101 for 2 and they now need 111 runs to win this match and the series as well.

A cricket maniac who lives his life like a T20 match, time is short so make the most of it. Always thriving to learn more about cricket writing and obviously being an Indian, a big cricket expert.
Previous ArticleSTR vs SCO: Possible Adelaide Strikers Playing 11 for Match 49 of Big Bash League
Next ArticleSTR vs STA: Possible Melbourne Stars Playing 11 for Match 39 of Big Bash League