After ODI nightmare, Australia would come out to salvage pride in the one-off Twenty 20 International at Edgbaston in Birmingham before heading to Zimbabwe. England clean swept Aussies in the 50-over  format 5-0.

The tourists almost crossed the line in the final One-Dayer and were only denied by Jos Buttler special, who added 94 runs with the tail (9th and 10 wicket) to clinch the win for the Three Lions. The tourists would be looking to repeat the bowling effort of the fifth ODI to keep the strong English batting quiet in their final game of the tour.

On the other hand, in-form England would look to carry on their winning run. They have not been at their best in the shortest format recently but would look to improve their T20 record making the most of the form by their side.

The Twenty 20 unit for the hosts is not too different for the hosts, with Jonny Bairstow, Jason Roy, Alex Hales, Joe Root Eoin Morgan and Jos Buttler being the order of batting. The bowling attack is expected to be formed around Liam Plunkett, Adil Rashid and Moeen Ali.

Pitch and conditions: Going by the recent results at the venue, it is most likely to be a high-run scoring affair.

Read on for ENG vs AUS Dream11 Team News and England vs Australia team news and playing11.

Speaking of the ENG vs AUS Playing 11, here’s how the two sides can line-up.

Note: This ENG vs AUS Dream11 prediction is based on news sourced from various sources. We suggest you pick your playing 11 from the squad listed above basis England vs Australia team news. 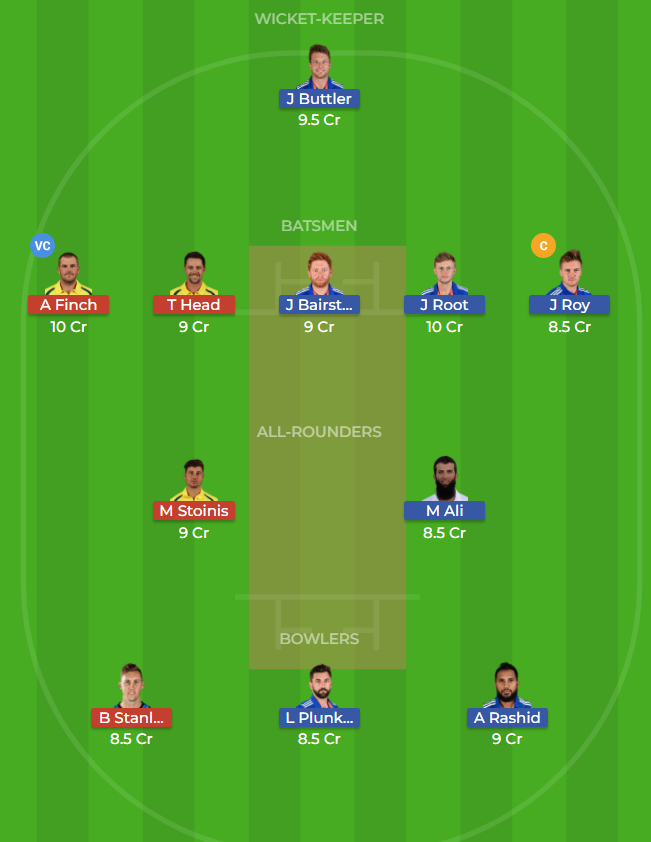 Note: Kindly revisit before the deadline to get the final update of the England vs Australia Dream11 Prediction. Also, hit the bell icon on the bottom right side of your screen to get all the latest Dream11 prediction updates.