Guyana Amazon Warriors will be squaring off against Barbados Tridents in the next match of Caribbean Premier League 2019 which will be played at the Providence Stadium in Guyana.

This would be the first match for Barbados Tridents in this season, whereas, Guyana Amazon Warriors will be playing their second match of the season.

The Amazon Warriors registered an easy win over St Lucia Zouks in their opening fixture of the season courtesy Shadab Khan and Chris Green’s valiant effort with the ball. They would be looking to put up a decent show once again in order to register their second win on the trot.

Shimron Hetmyer blasted an unbeaten 70 in the last game against St Kitts and Nevis Patriots. he has now scored 94 runs from two innings in this season.

Shadab Khan has scalped 5 wickets so far in this season from 2 matches.

Romario Shepherd, Chris Green and Ben Laughlin have taken 3 wickets each so far from 2 games.

Nicholas Pooran was the top run-getter for West Indies in the World Cup. He has amassed 274 runs from 14 innings.

With Alex Hales joining the squad, the Tridents top-order looks heavy now with Johnson Charles partnering him. The stylish Nottinghamshire batsman has amassed 1644 T20I runs from 67 innings at a healthy strike-rate of 136.65.

Skipper Jason Holder has played 38 CPL matches and scored 445 runs from 31 innings. With the ball, he has taken 25 wickets at an economy rate of 7.4.

Proteas veteran all-rounder Jean-Paul Duminy will make his maiden CPL appearance in this season. He has an experience of 81 T20I and has scored 1934 runs at a strike rate 126.24. 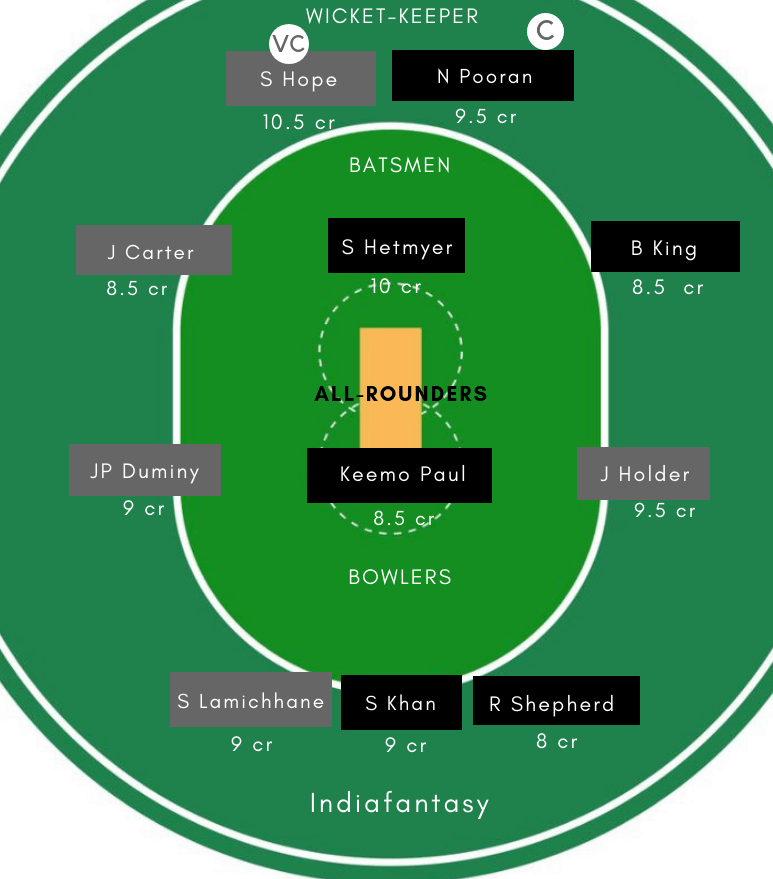 Disclaimer: Management can take late decisions depending on the match situation. The fantasy teams which we have provided here of GUY vs BAR Dream11 is best of our interest and depending on the credit scores of the players.