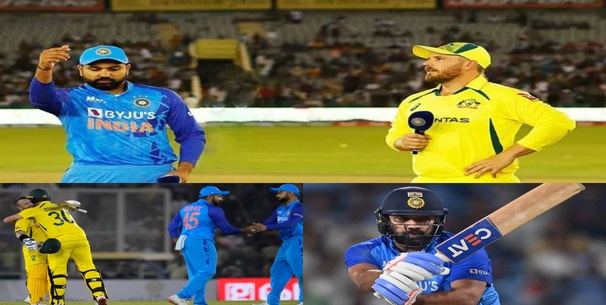 IND vs AUS Dream 11 Prediction: After a mesmerizing finish to the last T20I, we move on to the series decider for a blockbuster finish which will be played at the Rajiv Gandhi International Stadium in Hyderabad on 25 September, 2022(Sunday). The game was curtailed to a 8 over per side game due to wet outfield. Usually there is not much to analyse from an 8 over game, but India had quite a lot of positives from the game. The death bowling maestro, Jasprit Bumrah made a prolific return to the international setup by picking up the all important wicket of Aaron Finch. Axar Patel continued his form from Mohali and was again the pick of the bowlers grabbing a couple of wickets for just 13 runs. Rohit Sharma lived up to his reputation of being the hitman by scoring 46*(20) which proved to be a match winning knock. Dinesh Karthik’s finish was the icing on the cake and the man showed why he is backed as the finisher for the Indian team. On the other hand, Aussies also had their fair share of positives as Aaron Finch once again showed signs of great touch on a difficult wicket by scoring 31(15). Matthew Wade on the other hand, once again established himself as a finisher when he scored 43*(20). Adam Zampa was back at his best when he dismissed the likes of KL Rahul, Virat Kohli and Surya Kumar Yadav cheaply. However, one thing which both the teams would still like to work on would be their death bowling.

The action moves from the Western part of the country to the deccan region. The weather is expected to be bright and sunny during the afternoon and breezy during the evening. There is no chance of rainfall, so we can expect a full 20 over game. Historically, Hyderabad has hosted one T20I in which the total score after two innings was more than 400 runs combined. During the IPL, the surface has offered assistance to both the batters and the bowlers. The surface basically supports good cricket and shall provide an ideal platform to all the players involved. The par score is expected to be somewhere around 160-170 runs. Dew shall not come into play during the course of the game.

The Indian team captain has been on a role off late. With the new attacking approach he makes sure that he goes big from the very first ball. As a result, he has been able to get off to a flyer in the recent games. He will look forward to continue from where he left at Nagpur.

Hardik Pandya brings the necessary balance to any side in the world irrespective of the conditions. Thus, his ability with both bat and ball shall prove to be decisive to predict the outcome of the game.

Josh Hazlewood has played a crucial role in bolstering the Australian attack and has made sure to regularly pick wickets for his side. He has done a good job with his variations in recent times which has helped him improve in the shortest format of the game.

Glenn Maxwell is known for his aggressive style of batting and players like him should not really worry about recent form. He is a handy bowler who can chip in with a couple of overs and might as well get a few wickets for the team. He is an explosive batter and his recent duck is no sign of worry for the Aussies as it just takes him a few deliveries to get himself going.

Who will win India vs Australia today match?

According to the India vs Australia today match prediction, India are the favourites to win this match.

Tags: aus vs indAustraliaIND vs AUS 2022IndiaIndia vs Australia