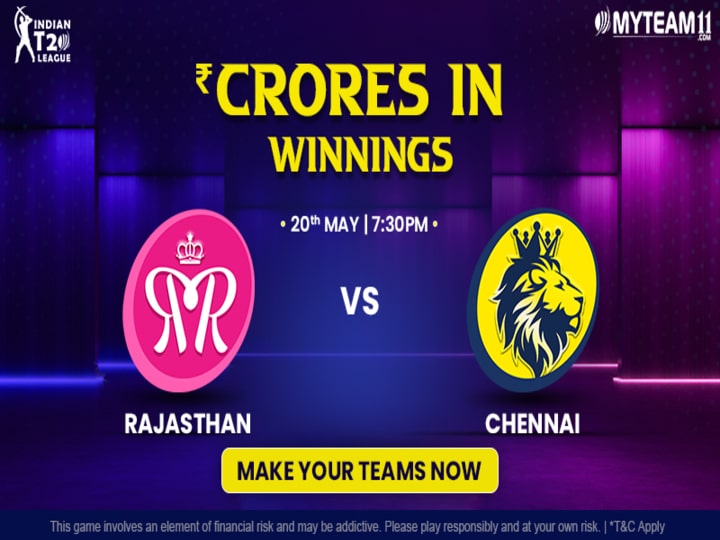 Rajasthan and Chennai will battle each other in the 68th match of the Indian T20 League. Rajasthan is on the verge of getting qualified in the playoffs. However, the team has to make sure that they should win their next match in order to qualify as soon as possible.

Chennai would like to make things difficult for Rajasthan and stop them from winning their upcoming battle. With everything at stake, the fans should expect nothing short of a hard-hitting contest.

Rajasthan has been in a tremendous form throughout the Indian T20 League 2022. The team is currently at the number 3 spot in the points table. However, the men in pink haven’t qualified for the playoffs.

Rajasthan defeated Lucknow during their last encounter. In the last match, while Jos Buttler failed to put runs on the board, Yashasvi Jaiswal stepped up to the mark and scored 41 runs for the team. Throughout the season Sanju Samson has played important innings and has held the team in the middle overs, he scored 32 runs from his bat. Devdutt Paddikal held his end and scored 39 runs off just 18 balls. However, the batting lineup is missing the genius between the wickets.

The bowling unit of the team has been brilliant this season. Yuzvendra Chahal is leading the division with the most number of wickets. The team has to win the next match to seal the deal and qualify for the playoffs.

Chennai is eliminated from the race of the Indian T20 League trophy. The mighty batting line up of the Yellow Army fell victim to the clever bowling of Gujarat.

In the last match, batting first, Chennai scored 133 runs in the span of 20 overs. The batting lineup has always been a matter of concern for the team. When one player, the rest of the team suffers. Ruturaj Gaikwad scored 53 runs in the last match; however, the rest of the team did not contribute much with the bat. Devon Conway scored just 5 runs, and Shivam Dube walked back to the dressing room without disturbing the scoreboard. MS Dhon only scored 7 runs with his bat, meanwhile, Mitchell Santner scored only 1 run.

All-rounder Moeen Ali batted in the middle overs, the fans expected more from the English batter but he got out after scoring 21 runs. N Jagadeesan was the second-highest run-scorer for the Chennai side in the last match with 39 runs in his bag.

The pitch at the Brabourne Stadium generally gives assistance to both bowlers and batsmen with the dew factor coming to play deep in the match. The short boundaries and a quick outfield should delight the batsmen of course.

Suggested Playing XI No.1 for Rajasthan vs Chennai MyTeam11 Team:

Suggested Playing XI No.2 for Rajasthan vs Chennai MyTeam11 Team: