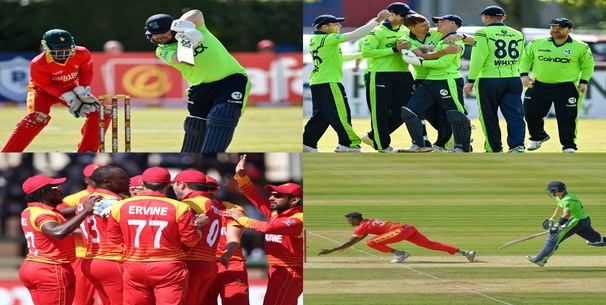 ZIM vs IRE Dream11 Prediction : The second day of the marquee event shall be packed with some thrilling encounters. Initial game would consist of West Indies and Scotland, and the second would be another hard fought game for a place in the Super 12. The game between Zimbabwe and Ireland is expected to be a thriller as the teams possess similar skill sets. Zimbabwe have not really had many T20Is apart from that home series against Bangladesh, which they went on to win 2-1. Their lack of T20I games in the build up to the World Cup was visible in the practice match against Sri Lanka as they looked rusty. Ireland would be riding high on confidence after that series win against Afghanistan. Since then, they have not played any T20I but did play a Warm Up game against Namibia which did not produce ideal result for them.

Where to watch ZIM vs IRE  Live?

Watch ZIM vs IRE Live on Star Sports Network. Online streaming will be available on the Disney + Hotstar app.

The conditions at the Bellerive Oval in Hobart are ideal for the batters. The ball comes on to the bat and the batters enjoy themselves on a steady paced wicket. Teams usually prefer chasing here, as the pitch becomes better for the batters as the game progresses.

If Zimbabwe pose any kind of a threat to the opposition he will have to play a big role in guiding the team towards victory. His all round ability is not hidden from the world. He can bat deep and help his team chase steep totals and at the same time he can chip in with some off spin as well.

The skipper of the Zimbabwe team gave the team a good start by scoring 24 off 15 balls. He is a player who has the ability to anchor the innings. A lot shall rest on his shoulders to guide his team to the Group Stage.

Paul Stirling with his numbers and experience is an Irish legend for sure. His numbers signify how big a player he is in this format of the game. 3000 runs in the format with a strike rate of about 135 does talk a lot about the ability of the player.

Gareth Delany is a young Irish all rounder. He is known for his leg spin bowling and can also contribute with the bat as and when required. His spin bowling can add some variety to the Irish attack and cause some problems for the opposition.

Who will win Zimbabwe vs Ireland  today match?

Considering form, head to head record and morale of both sides, Ireland are favourites to win as per our Zimbabwe vs Ireland  today match prediction.