BAR vs PSV Dream11 MATCH PREVIEW:
Barcelona will be aiming for the top spot in their Champions League group when they travel to the Netherlands to take on the Dutch Champions PSV Eindhoven at Philips Stadion, in Eindhoven, tomorrow on Wednesday night (IST).

PSV Eindhoven:
PSV Eindhoven were the least fancied team in the group which had some big guns of European Football; Barcelona, Inter Milan and Tottenham Hotspur to be precise. And after picking up just one point from their opening first four games, their Champions League hopes are over while the Europa League qualification could also see its end if they fail to beat the mighty Barcelona in this home match.

PSV started their journey in Europe with a 4-0 away loss against the Catalan giants. While the 2-1 loss against Inter Milan in the very next match could have been avoided as they were ahead in the match. The same can be said about their double-headers against Spurs which could have fetched them more than one point they eventually earned.

The life in the Eredivisie, however, remains like walking in the big grassy field on a pleasant day. The reigning Dutch champions are five points clear at the top of the league and have won all the 13 games so far in the domestic league campaign.\

Quite clearly, it’s the Gulf of Europe which is too big and too daunting for them to bridge at this very moment.

Barcelona:
Barcelona’s season so far is a kind of mystery. They started their season with a 2-1 win over Sevilla in the Supercopa final. Five straight wins followed that result, including an 8-2 trouncing of Huesca and it looked all too easy and as if the Catalan giants may go on a long unbeaten run this time around as well.

However, Girona revealed too many chinks in their unbreachable looking armour. Leganes then produced the result of the tournament so far, beating them 2-1, and Atheltic Bilbao frustrated Barca as they held them to a 1-1 draw.

So they headed to Wembley on the back of some bad results and it was highlighted by the media that Tottenham could rub more salts on their wounds. But then the mystery is how they played in that particular match and how Lionel Messi looked a creature from some another planet as he produced ‘The performance of the season’ at the home of English football. Also, the incredible wins over Sevilla, Inter Milan and Real Madrid were achieved within just two weeks.

But Ernesto Valverde’s team is now winless in the last three matches and is still trying to find answers to how could they lose 4-3 to Real Betis at their won home Camp Nou?

PSV Eindhoven:
Injured – Twenty-three-year-old New Zealand midfielder is the only major absentee for the hosts ahead of this match.
Suspended – None
Questionable – None at this moment.

Barcelona:
Injured – Manager Ernesto Valverde has announced his squad for the match against PSV and there are few absentees.
Luis Suarez and Arthur Melo have been left out due to the injuries, while backup goalkeeper Jasper Cillessen is also not the part of the squad.
Sergi Roberto suffered an injury against Atletico and has been ruled out of this match.
Meanwhile, Thomas Vermaelen, Sergi Samper, and Rafinha remain long-term absentees for the La Liga champions.
Suspended – None
Questionable – Ivan Rakitic and Coutinho have returned for the away side after missing out on the weekend. Whether they start or not remains to be seen.

Note: With Luis Suarez out, Malcolm may start the match alongside Lione Messi at the front.
Key Players – Messi, Dembele

Team 1:
Lionel Messi and Hirving Lozano are our captain and vice-captain respectively. The talent that Lozano is, the world’s biggest football clubs will definitely come for him.
The midfield will be led by the likes of Coutinho and Rakitic. 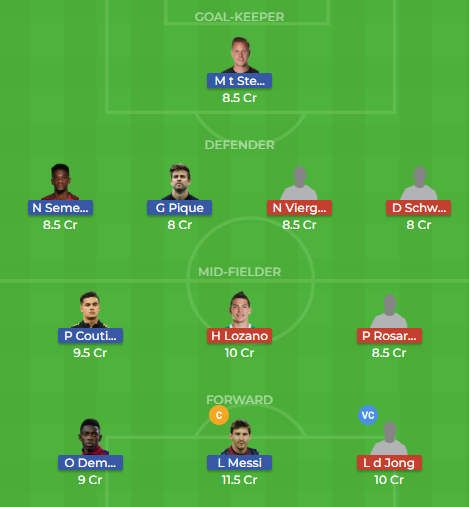 Team 2:
we have added Dembele to our squad but Messi continues to lead the team.

INDIA FANTASY PREDICTION:
PSV Eindhoven are absolutely put the Dutch league on fire at the moment, winning all the 13 matches so far. However, Europe remains are truth and we expect the visitors to win this game by at least a two-goal margin.

THIS BAR vs PSV Dream11 MATCH PREVIEW IS BASED ON OUR RESEARCH AND UNDERSTANDING FROM VARIOUS NEWS SOURCES. YOU CAN SELECT YOUR OWN PLAYING 11 ON THE BASIS OF TEAM NEWS AND ALL THE OTHER INFORMATION REQUIRED FROM THIS WEBSITE. USING OUR TEAMS IN ANY CONTEST WILL INCREASE THE PROBABILITY OF HAVING THE SAME EXACT TEAM WITH OTHER USERS CAN LEAD TO THE WINNINGS SPLIT.