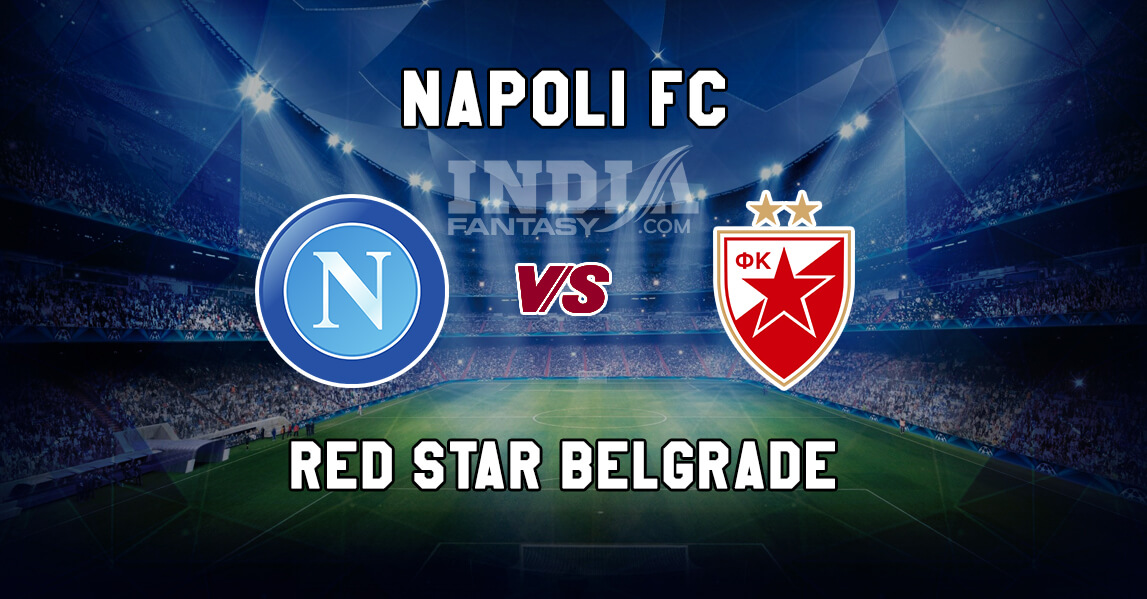 NAP vs RSB Dream11 MATCH PREVIEW:
Napoli will be looking for a crucial win the Champions League when they play host to Red Star Belgrade at Stadio San Paolo, in Naples, on Wednesday night (IST).

Napoli:
Not many backed Napoli to progress to the knockout stage of the Champions League when their name came against world’s most expensive side PSG and the last year’s finalists Liverpool at the draw ceremony back in August. But four games into the group stage and it’s Carlo Ancelotti’s men who are still unbeaten and lead the table at this moment.

Though there’s not much gap between them and the 3rd placed PSG who are just a point shy of them. And the situation in the group is that the rock-bottom Red Star Belgrade, in all possibility, can top the group as things stand. So the points have certainly been taken by each team, making this group “A Group of Death.”

Red Star Belgrade:
Red Star Belgrade, are in a very good form at this moment. Since losing to Liverpool 4-0 at Anfield, they have won six times in the last seven games, keeping clean sheets in four of them and drew only one game; the last one against Dinamo Vranje which ended in 2-2. The draw remains only one of the two games where they dropped points in the Serbian SuperLiga, and still lead the table by a massive 9 points.

However, the away form in Europe is nightmarish for Vladan Milojević and his men. The reigning Serbian Champions have already lost 5-0 and 4-0 on the road against PSG and Liverpool this season.

Napoli:
Injured – Napoli will be missing three key players in this match. Vlad Chiriches, Simone Verdi and Amin Younes have all be ruled out with their respective injuries.
Suspended – None
Questionable – None

Red Star Belgrade:
Injured – For Red Star Belgrade, Dusan Jovancic, Goran Causic, Filip Stojkovic and Vujadin Savicare all have been ruled out of the trip to Naples.
Suspended – None
Questionable – Richmond Boakye remains questionable and will be assessed ahead of the match.

Team 1:
Koulibaly and Mario Rui, along with Rodic will be our guardian at the back. The two Napoli stars are one of the best in their positions.
Marin, Hamsik, and Callejon will be pulling the strings in the midfield. while Insigne will be our captain. 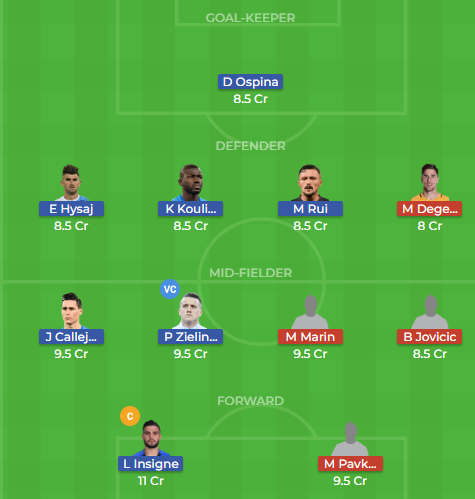 There are not many changes, Insigne will be the spearhead.

INDIA FANTASY PREDICTION:
The opening day fixture was the first game between these two clubs in Europe.
Napoli are a regular team in the Champions League, with this season being their 3rd in the row, while Red Star Belgrade are playing after a gap of 27 years.
For all their home exploits, Belgarde are struggling on the road big time and we expect a home win in this game.
Prediction 2-0 (at least)

THIS NAP vs RSB Dream11 MATCH PREVIEW IS BASED ON OUR RESEARCH AND UNDERSTANDING FROM VARIOUS NEWS SOURCES. YOU CAN SELECT YOUR OWN PLAYING 11 ON THE BASIS OF TEAM NEWS AND ALL THE OTHER INFORMATION REQUIRED FROM THIS WEBSITE. USING OUR TEAMS IN ANY CONTEST WILL INCREASE THE PROBABILITY OF HAVING THE SAME EXACT TEAM WITH OTHER USERS CAN LEAD TO THE WINNINGS SPLIT.