Real Betis:
AC Milan, on the other hand, look like a team long way off the standard they touched last season. The Béticos accumulated an impressive 60 points last season and finished at 6th, also qualifying for the Europa League.

However, this season has given them a reality check of sorts. The squad is more or less the same and looks a bit tired after negotiating two games in a week. This could be the reason they have just 13 points from the first 11 games in La Liga. The performance has to improve if they are to play in Europe next season.

AC Milan:
AC Milan have certainly turned the corner around in the last few weeks. The Italian giants didn’t make a good start in the new Serie A campaign by any means. They lost the first game 3-2 against Napoli despite going 2-0 up in that match. Still, despite winning in the next game against AS Roma, three successive draws against the lowly teams were enough to make doubters ask for the head of Gennaro Gattuso. But since then it has been quite a turnaround for the Rossoneri.

The 18-times Serie A champion have won five times in the last six league games and that one loss came in the Milan Derby which should have ended in a stalemate. But the biggest improvement has certainly been the fight in the team which is making them a dangerous outfit once again.

Real Betis:
Injured – Javi Garcia is the most notable absentee for the hosts in this match.
Suspended – None
Questionable – None

Note: The last time Real Betis played against AC Milan, both Andreas Guardado and Joaquin weren’t part of the squad. But both have returned now and are expected to start this match.
Key Players – Lo Celso, Sanabria

AC Milan:
Injured – Ivan Strinic, Gonzalo Higuain, Lucas Biglia and Mattia Caldara all have been ruled out of this match.
Suspended – Samu Castillejo is suspended for the Italian side.
Questionable – None 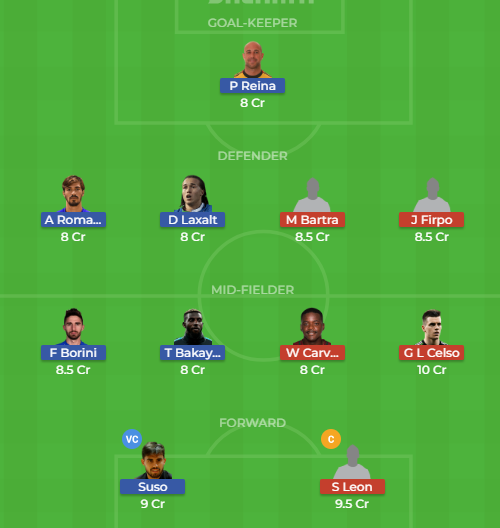 INDIA FANTASY PREDICTION:
It’s a very tough call. But we are backing AC Milan not to lose this match.

THIS MIL vs RB Dream11 MATCH PREVIEW IS BASED ON OUR RESEARCH AND UNDERSTANDING FROM VARIOUS NEWS SOURCES. YOU CAN SELECT YOUR OWN PLAYING 11 ON THE BASIS OF TEAM NEWS AND ALL THE OTHER INFORMATION REQUIRED FROM THIS WEBSITE. USING OUR TEAMS IN ANY CONTEST WILL INCREASE THE PROBABILITY OF HAVING THE SAME EXACT TEAM WITH OTHER USERS CAN LEAD TO THE WINNINGS SPLIT.