If this season was a script written by a Barcelona fan, then this could have been the game where Catalan giants complete their unbeaten, a feat no team in La Liga’s history managed to achieve. However, Ernesto Valverde’s team scuppered the chance at the most inopportune time as they lost 5-4 in the 37th game of the season against Levante last weekend.

Lionel Messi was rested in that game and it seemed a right decision before last week’s match considering how much efforts the 5-times Ballon d’Or has put in this season. But the fact that Barca opted to travel to South Africa this week for some friendly match didn’t go down well with their fans who were more interested in completing an unbeaten run than some goodwill mission in Africa.

Now all the focus will turn towards Andres Iniesta as this will be the last time that the 2010 World Cup final scorer will be seen in a Barcelona shirt.

It has been quite a strange season in many respects in Barcelona and even another league cup and double hasn’t been enough to keep many punters happy. It’s fair to say they’ve had a far better campaign than Real Sociedad though. The Basques failed to make much impact in Europe and have failed to come close to threatening to get back into the Europa League through the league. Some decent late-season form under Imanol Alguacil has though at least salvaged some pride and they could even end up with a top half finish if they can get something from this game.

Barcelona: French International Samuel Umtiti is carrying a knock and with World Cup on the horizon, he is expected not to be included in the playing 11 for this particular clash. Barca’s another center-back Thomas Vermaelen is out injured as well, so Yerry Mina is expected to start at the back.

Sergi Roberto will be serving the 3rd of his four-match suspension with Nelson Semedo continuing at the right-back. Sergi Samper is also injured for the Catalan giants.

For visitors, Imanol Agirretxe and Hector Moreno have been ruled out of this match due to injuries, while Carlos Martinez is a doubt for the two-times Spanish Champions. 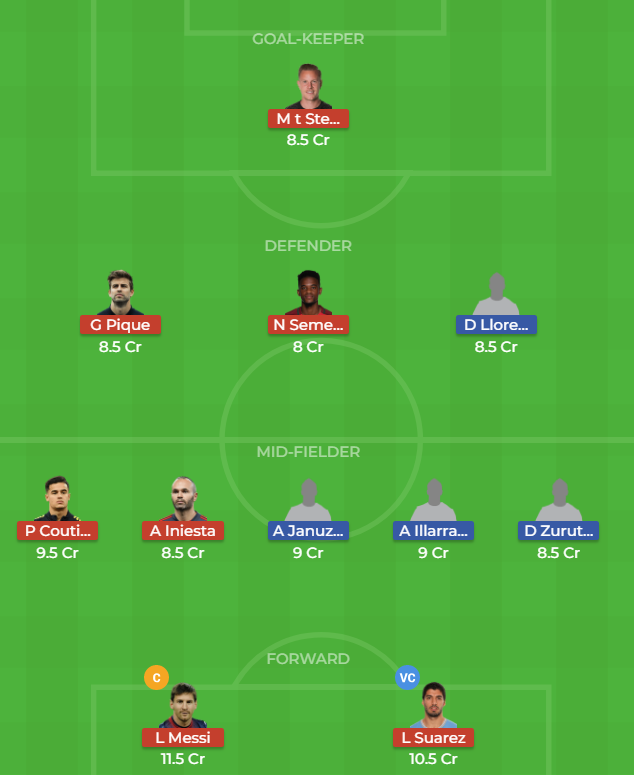 Despite Real Socided winning four times in the last six games, a result looks like a tough ask for them. Also, the Camp Nou will be high on emotions as this is Andres Iniesta’s final game of his Barcelona career. So expect some this Barcelona side to finish the job in this game and bid adieu to their legend in the best possible way.

NOTE: THIS RS vs BAR Dream11 MATCH PREVIEW IS BASED ON OUR RESEARCH AND UNDERSTANDING FROM VARIOUS NEWS SOURCES. YOU CAN SELECT YOUR OWN PLAYING 11 ON THE BASIS OF TEAM NEWS.