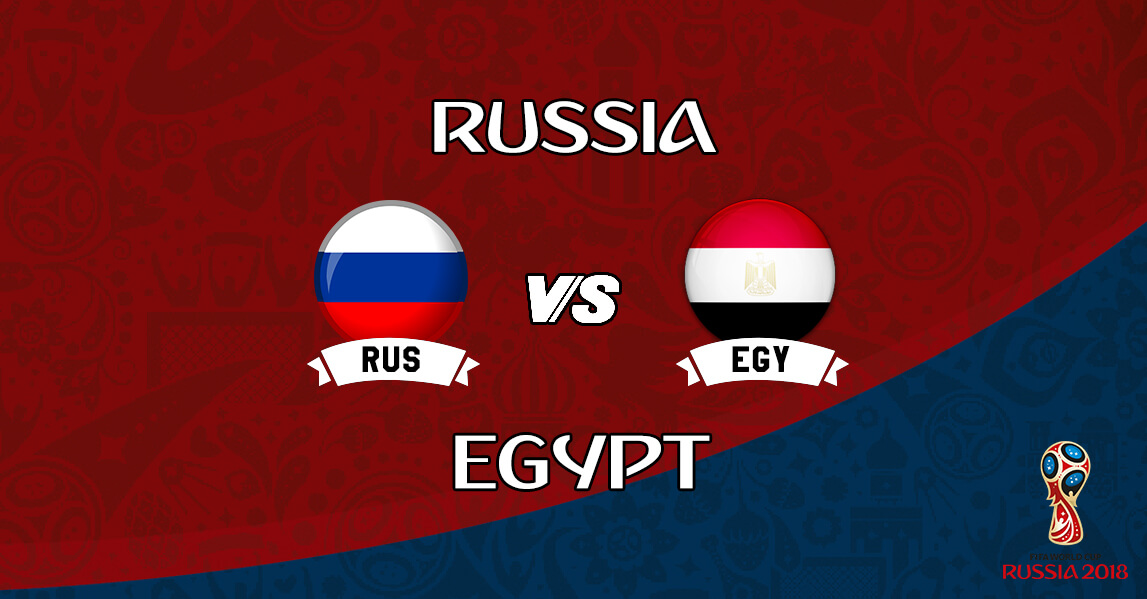 The Russians who came to the ground to cheer for their country didn’t even hope to see a 5-0 win and it was according to the script as Alan Dzagoev took off the field with a hamstring injury, all hope of winning the opening game against Saudi Arabia went away but came to ground Denis Cheryshev former Real Madrid player scored the second goal for Russia with a beautiful finish. He went on scoring one more goal in the second half for his country as his country went on thrashing the oil leaders of the world to 5-0 nil. Their performance could have challenged any team any day and now that they will be playing their second match of the group against Egypt at the St. Petersburg stadium, St. Petersburg. But this game won’t be easy for the hosts as the Egyptian King will make his appearance for his team after missing out on their defeat against Uruguay in their opening game.

Egypt had a good game against Uruguay but the last moment’s panic cost them the game with a header from Uruguay’s defender Jose Gimenez, the tie broke and Uruguay went on keeping the three match points. After this match Egypt would be facing Saudi Arabia which they can easily win but now they have to win this game to come to the top two positions in their group so that they can qualify for the next round. All eyes would be on Mohamed Salah who would be expected to carry his country to the final as he did with his club.

This FIFA World Cup 2018, Group A, 2nd match is to be played at St. Petersburg Stadium, St. Petersburg at 1900 hours in Local time. A thrilling game awaits everyone on Match Day 6 for everyone and can be watched live on Sony LIV.

Russia: Alan Dzagoev is ruled out from playing this game because of the injury he picked in Russia’s first game against Saudi Arabia. Denis Cheryshev has earned himself a first team berth in this game with the two beautiful goals he scored after coming off the bench. Aleksandr Golovin will be forced in the central attacking midfield. Artem Dzyuba is also expected to get a first team spot in this game as well, as he also scored for Russia after coming in as a substitute.

Egypt: Mohamed Salah will start in this match as he missed out on the first group match which would see Amr Wards forcing off into the bench and apart from that Egypt is expected to have the same starting lineup they had against Uruguay.

Mohamed Salah is still a doubt for Egypt, that’s why we have included him in only fantasy squad. However, he is more than likely to feature in this game. We will be giving you more update on that later.

For Russia, everything turned to gold whatever they touched in the last game against Saudi Arabia. So we are not expecting the hosts to change their playing11 in this game.
21:40
Egypt head coach Hector Cuper has told the media that his superstar striker Mohamed Salah is fit for the crucial World Cup 2018 match against hosts Russia. The Liverpool’s Premier League player of the year misses the last game against Uruguay due to a shoulder injury.
Egypt need, at least, a draw in this game to keep their hopes of making into the knockout stages alive.

Russia opened up the 2018 World Cup with a stunning 5-0 win over Saudi Arabia. Egypt are on the back foot after falling to a 1-0 defeat in their group opener. They need a positive result on Tuesday. Mohamed Salah’s return is a game changer for Egypt but is it enough to bring Russia back down to earth?

NOTE: THIS RUS vs EGY Dream11 MATCH PREVIEW IS BASED ON OUR RESEARCH AND UNDERSTANDING FROM VARIOUS NEWS SOURCES. YOU CAN SELECT YOUR OWN PLAYING 11 ON THE BASIS OF TEAM NEWS.

THIS RUS VS EGY MATCH PREVIEW IS BASED ON OUR RESEARCH AND UNDERSTANDING FROM VARIOUS NEWS SOURCES. YOU CAN SELECT YOUR OWN PLAYING 11 ON THE BASIS OF TEAM NEWS AND ALL THE OTHER INFORMATION REQUIRED FROM THIS WEBSITE. USING OUR TEAMS IN ANY CONTEST WILL INCREASE THE PROBABILITY OF HAVING THE SAME EXACT TEAM WITH OTHER USERS CAN LEAD TO THE WINNINGS SPLIT.