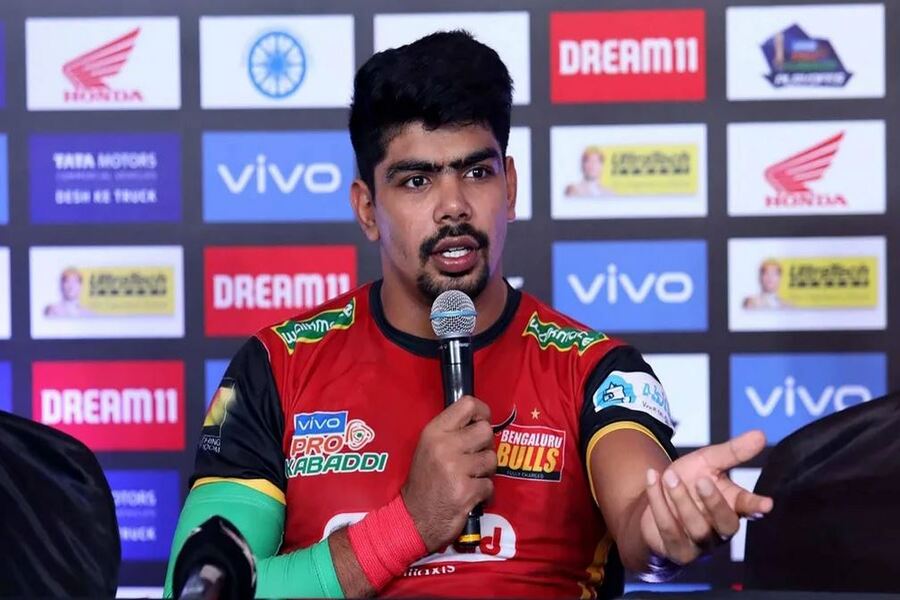 The Bengaluru Bulls have been terrific in this season, with their raiding as well as tackling skills. They have secured 4 victories in 5 league matches and are looking quite strong. In the last league match, they won against Puneri Paltan with a scoreline of 40-29. The team had around 43% and 42% success rate in raids and tackles respectively. The team secured 4 all points in the 2nd half, which ultimately made the difference. The best performer for the team was again Pawan Sehrawat with 11 points, while Chandran and Bharat supported well with around 5 points each.

The best raider in the Pro Kabaddi League has been using his experience well in crucial situations and helping the team to secure victories in a fine fashion. In 6 matches of this season, he has 60 successful raids, including 1 Super Raid and has registered 4 Super 10s.

One of the finest talent to come out of the league in the past 2 years has been Chandran Ranjith. He has been a great support to the captain in earning points, when the team is looking in trouble. In 6 matches of Pro Kabaddi 2021, he has 3 Super Raids and registered 1 Super 10s.

The Jaipur Pink Panthers team have 2 wins in 5 league matches and are positioned 10th in the points table. The team needs a win to rebuild their fine momentum, they had generated in the first few fixtures of the tournament. In the last league match, the team lost to Bengal Warriors with a scoreline of 28-31. The best performer for the team was Arjun Deshwal, who bagged 16 points, while Deepak Hooda earned 5 points. The team fared better than the oppositon in raids with 51.35% success rate, but had only 29% success rate in tackles.

The captain of the Indian Kabaddi team can be the differential pick for your fantasy given his abilities and track record. In 5 matches of this season, Deepak has 27 successful raids, with 1 Super Raids and 1 Super 10s.

The best performer for the Jaipur Pink Panthers has been one of the reasons for the team’s victories in this season. In a total of 98 raids, he has been successful in 54 of them, and has 1 Super Raids, with 5 Super 10s to his name.

In the last season, the both teams won 1 match each, and it is expected to be a tough contest in this edition as well. But, the Bengaluru Bulls are in terrific form and certainly have an edge over the opposition and will look to continue their same form. While the Jaipur Pink Panthers will look to take the confidence and trust on their key players to compete well.