GSW vs LAL Dream11: “Momentum”, a word that rings supreme in the sporting world. You have the momentum, you can down the biggest giants on your day, but that is what makes the giants special, they can seize the momentum on their will but the momentum needs focus, hard work, and dedication that is unparalleled. Golden State Warriors captured the momentum last season and won the championship. The Warriors will begin their title defense in the season opener against the Los Angeles Lakers.

The Warriors have nothing to prove at this point. They are the winningest franchise of their era and except for the wing positions that has been graced by Kevin Durant at one point, the starting core has been the same. Last season, they showed that they haven’t left the scene at all

The Lakers have a left to prove. They have struggled ever since their 2020 title win and has played some of the most underwhelming basketball in the league. Last season the LeBron-led team couldn’t even make the Play-in tournament and this will be a tough year for them if Anthony Davis gets injured again. Can they make amends?

Warriors: Can they be stopped?

The Warriors under head coach Steve Kerr continue to accelerate the pace at which players grow. He has changed this Franchise from top to bottom. While it can be argued that he has a stacked team but no, having a stacked team isn’t enough, you need much more. The Warriors develop most of their talents after drafting them. Stephen Curry, Klay Thompson, Draymond Green, James Wiseman, Kevon Looney, and Jordan Poole have all been drafted and there is no doubt that the backcourt trio of Curry, Thompson, and Poole is unmatched, largely thanks to the freedom you are granted as a guard under Kerr.

Wiggins was acquired in a trade and what a gambit he has turned out to be! He has become one of the best defenders and he can score both in iso and off-the-ball situations. The exploits don’t stop there when you consider how intimidating James Wiseman is in the paint. Seriously, this is as stacked as you can be and then you add Donte DiVincenzo! A perfect defender, a strong rebounder, and a guard with all the talent in the world. If injuries don’t derail them, I don’t see anyone stopping them at least till West Finals.

Lakers: A lot to prove

Any team that is led by LeBron James is expected to be the world beater. The Lakers haven’t been so for the last two seasons and that is not LeBron’s fault. The move to bring in Russell Westbrook has been a disaster, he just didn’t fit in at all despite being one of the most available players on the roster. Anthony Davis remains an elite Forward but he was injured way too much last season with the Lakers having no substantial big as cover for him. Some changes in the offseason were surely above-average though.

First, Dennis Schroeder is back and he has experience playing alongside Davis and LeBron. Lonnie Walker IV is a great pick-up, although it remains to be seen if he can fix the hole created by the departure of Malik Monk. Kendrick Nunn is healthy and he has been someone who can score a bunch on his day. Juan Toscano-Anderson still has a high ceiling while Thomas Bryant was a decent pick-up as a big. Still, the Lakers have their work cut out if Westbrook keeps struggling.

Stephen Curry(GSW)
There has no one in the league that has led the league in three-pointers by such a huge margin as Curry. He is undoubtedly the best three-point threat to grace the NBA floor and he can do much more. I expect a 25-31 points, 5-8 assists, and 4-7 rebounds range.
Expected Fantasy Points Range: 30-45

Anthony Davis(LAL)
Anthony Davis is unstoppable as the driver to the rim and plays an All-Star-level brand of basketball. However, he continues to grapple with his injury. Here, I expect him to be in 24-34 points, 10-15 rebounds, and 1-3 blocks/steals range. 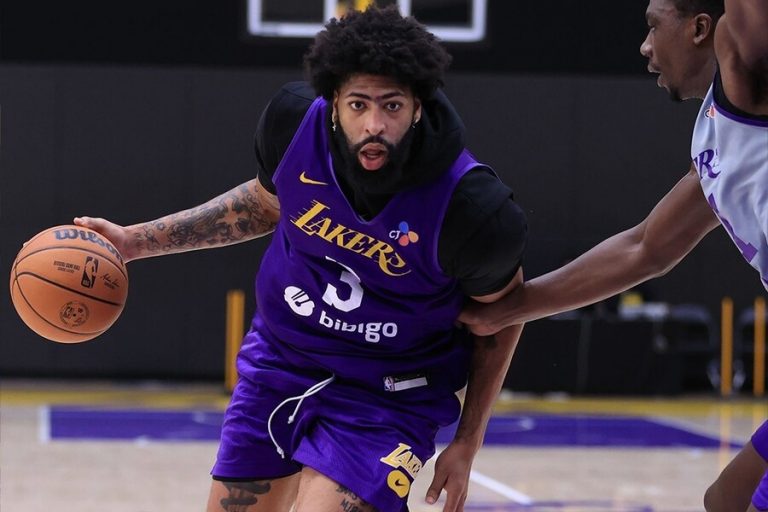 Jordan Poole(GSW)
Poole is a mirror image of Steph Curry and that alone means that the NBA fans can be in for a long haul of the Warriors’ championship bracket. I believe the creative scorer will be in 19-25 points and 5-8 assists range.

LeBron James(LAL)
LeBron is in a league of his own and despite his age, he continued inserting 30+ points games last season while being a superb rebounder and playmaker. I believe he will be in 25-33 points, 8-11 rebounds, and 7-10 assists range.

Andrew Wiggins(GSW)
Wiggins made the All-Star team last season and he will once again be a huge factor on both ends of the floor. I believe he will be in 16-22 points, 6-9 rebounds, and 1-2 steals range.

Russell Westbrook(LAL)
Westbrook is QUESTIONABLE for this game and he continues to be held responsible for Lakers’ woes which seems a tad bit unfair to me. Yes, sure, he hasn’t played a high-level of basketball but he is still an exciting player to watch.