The defending champions Golden State Warriors will take on the Milwaukee Bucks at the Oracle Arena, in Oakland, California, on Friday morning (IST).

The reigning champions showed one particular aspect from the title-winning last season in the 117-101 win over Memphis Grizzlies.

Last season, the Dubs blew away most of the teams in the 3rd quarter to take an unassailable lead in those games and Grizzlies felt the heat of their favourite pinprick zone in the game.

The match at Oracle Arena was tied at 58-58 at the interval, a score which most of us would have predicted considering how Memphis have been playing this season. However, the Warriors simply pulled away in what Kevin Durant called the 3rd quarter after the match as ‘Rim Protector’, after dropping 34 points against Grizzlies’ 15 in reply.

Before the ball rolls on the court, Stephen Curry issued a timely warning to his teammates ahead of the meeting against Milwaukee Bucks. The two-times NBA MVP has claimed that he sees Bucks as the Warriors of four years ago. This statement cannot be taken lightly as Bucks do have some of the finest young talents in their roster. But what’s more is that they are reaching a maturity level where consistency can be expected from them.

Stephen Curry – When Golden State Warriors are playing, Curry is the man to make your team around. He hasn’t won the NBA MVP awards in the last two seasons and looking at this contribution this season, it looks as if he wants the coveted title back. He is averaging 31.3 points per game.

Kevin Durant – The former Oklahoma star is going for 27.7 points per game this season.

Giannis Antetokounmpo – The 23-year-old star is a rising star and could be your star player in your NBA Fantasy team. He is dropping 25.8 points per game this season. He is also racking up 13.3 rebounds per game.

Khris Middleton – He is averaging the 2nd most minutes for Milwaukee Bucks this season, while his contribution of 19.5 points per game also comes at 2nd for the team. Definitely, he can fetch you some important points in the match.

GSW vs MIL DREAM11 TEAM NEWS:
Golden State Warriors:
Injured – Dubs forward Draymond Green lasted just 14 minutes against Grizzlies. Warriors revealed that the 28-year-old has suffered a sprained ankle and won’t be playing against the Bucks.
Meanwhile, DeMarcus Cousins remains out. The former Pelicans star hasn’t featured for Warriors since joining them in the off-season this year.

Questionable – Jordan Bell and Shaun Livingstone have been listed as questionable and will be assessed ahead of the match.

Milwaukee Bucks:
Injured – D. J. Wilson has been ruled out and won’t be travelling to Oakland for this match.

Questionable – Christian Wood is suffering from a finger injury and is a doubt for this match.

Suspended – Jordan Meeks is suspended for the away team. 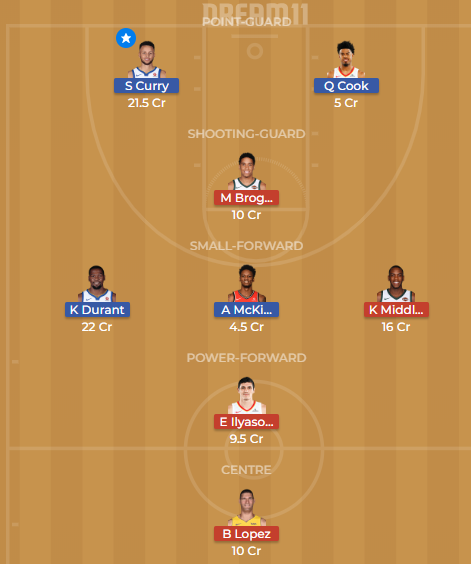 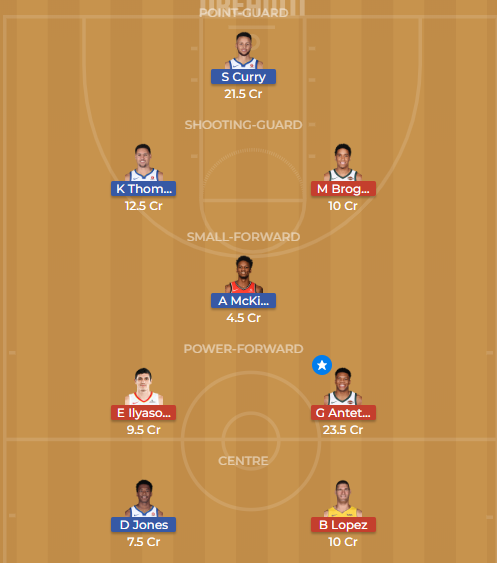 We are backing Golden State Warriors to win this match.

NOTE: THIS GSW vs MIL DREAM11 MATCH PREVIEW IS BASED ON OUR RESEARCH AND UNDERSTANDING FROM VARIOUS NEWS SOURCES. YOU CAN SELECT YOUR OWN PLAYING 11 ON THE BASIS OF TEAM NEWS.