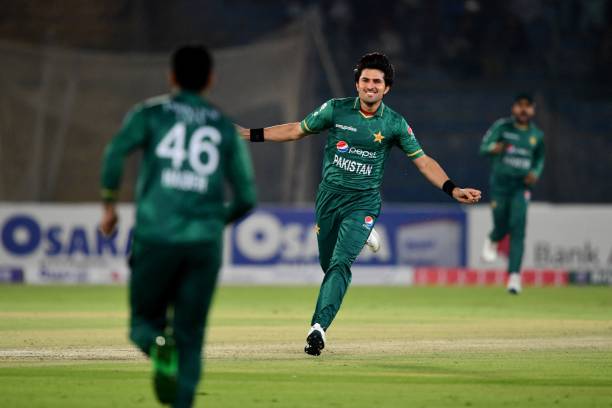 Like quick bowling greats of the game produced by Pakistan, Mohammad Wasim Jr is another player that succeeds a rich history of fast bowlers. He hit the ground running for the Pakistan senior side after impressing at the U-19 level with the white ball.

Considered by many as the future of Pakistan’s bowling attack, Wasim took the U-19 route before he punched his ticket for the senior side in 2021. A player of immense talent represented Islamabad United and Khyber Pakhtunkhwa, Wasim exploded with his lethal bowling attack at a very young age.

Wasim  first gained fame during the 2020 U-19 World Cup where he was one of the prime pace bowlers for the Men in Green. He alongside Mohammad Amir Khan were the main culprits for the opposition. In one of the two matches he played at the U-19 World Cup, he scalped a fifer and showed his talent.

His performances didn’t go unnoticed and was soon drafted into the senior side. He earned his first call-up to the Pakistan side in March 2021 when Babar Azam‘s Pakistan toured South Africa and Zimbabwe. However, it was not until July of that year when he made his debut.

Wasim’s first Match for the Green Army was against West Indies and made his presence feel. Wasim’s first international scalp was the legendary Chris Gayle, when he faced him at the Kensington Oval. Although the match ended in no result, Wasim still had a day to remember as he got Gayle and shared the new ball with another modern-day star Shaheen Shah Afridi.

Wasim was handed Cap No.94 in the T20 format and continued to be part of the Pakistan squad. In March 2022 he made his debut for the ODI side as Pakistan faced Australia at Gaddafi Stadium in Lahore. He became 232nd player to don the Pakistan colours in ODI format.

he was named replacement for Shaheen Shah Afridi for the 2022 Asia Cup, while the pacer was ruled out of the entire tournament with an injury.

Mohammad Wasim Jr is reported to be single and is still unmarried.