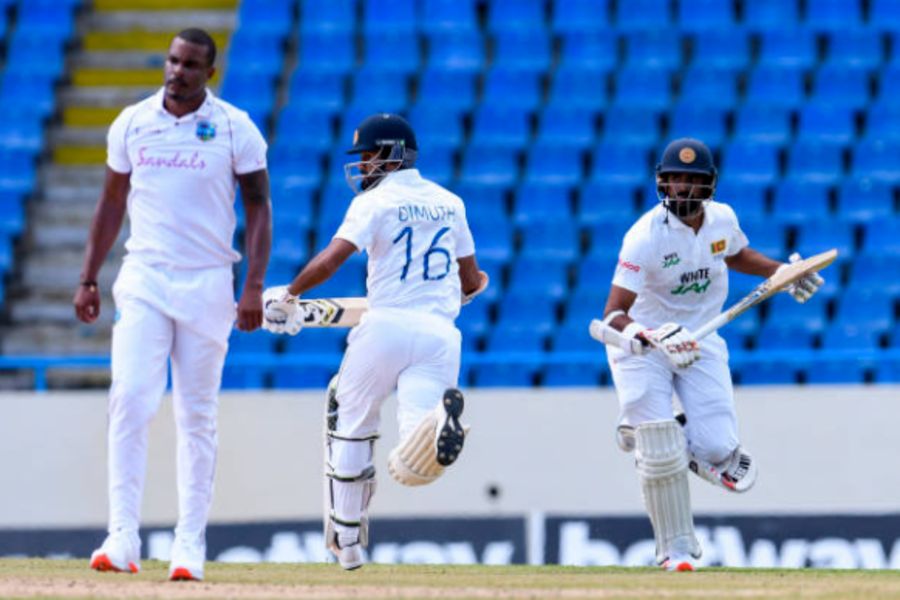 SL vs WI Prediction: Sri Lanka are set to clash against West Indies at the Galle International Stadium for the second and final test match. Sri Lanka won the toss and batted first, scoring 386 runs. West Indies responded with 230, giving up a 156-run advantage. The second innings of Sri Lanka was therefore declared early, setting up a target of 347.

Following his 147 in the first innings, Sri Lanka skipper Dimuth Karunaratne made 83 runs in the second. Angelo Mathews also batted well for his 69* in the second innings. The Caribbean side was then bowled out for 160 runs.

Sri Lankan spinners set up the win and they should go with the same side. Windies put on a largely good performance but for a collapse in the second innings. Shai Hope is expected to make his way into the XI for this game.

Where to Watch Sri Lanka vs West Indies Live score and telecast?

The second Test starts at 1000 hrs IST on Monday. Galle International Stadium will host the contest. The match will be broadcast on Sony Ten Network. Fans can also enjoy live streaming of the West Indies tour of Sri Lanka on the SonyLIV app.

Who Will Win SL vs WI today match?

SL vs WI Head to Head: The H2H record between Sri Lanka and West Indies in tests reads 10-4. Nine games ended in a draw.

The team winning the toss will seek to bat first putting pressure on the opposition with a large score. Regardless of whether Sri Lanka bats first or bowls first, the West Indies hitters have had no response for the hosts’ superb spin-bowling. The weather may possibly come to the Windies’ aid but it’s easy to forecast Sri Lanka winning this second Test and sealing the series. Here is the Sri Lanka vs West Indies Dream11 Team Prediction and three players who can make an impact:

Dimuth Karunaratne is a sound batsman who will be leading from the front once again. He scored a brilliant 150 in the first game followed by an 83 in the second innings.

Lasith Embuldeniya was difficult to play against as he took a fiver in the first game. He is certain to be amongst the wickets once again.

Rahkeem Cornwall is a must-have for your SL vs WI Dream11 teams. He was the highest points scorer for the Windies in the first game. He can contribute with both bat and ball.

Galle has a spin-friendly wicket as observed in the first game. However, runs can be had if batters spend time on the crease. The team winning the toss should be electing to bat first and put pressure on the opposition. The average first innings score her is 270. Sri Lanka vs West Indies Today Match Prediction odds are in favour of Sri Lanka.

The island nation gets rain from retreating monsoon currents during this season. For the second test starting on Monday, the first two days are likely to be affected by rain. However, the chances of rain reduce for the final three days. The probability of rain on Monday and Tuesday has been given as 80%. It might rain in the forenoon session on Wednesday. The weather on all days is expected to be humid. The maximum temperature on all days would be around 28 deg C in the afternoon hours. The playing conditions are not expected to be tough as the heat and humidity will be offset by the light breezy conditions.