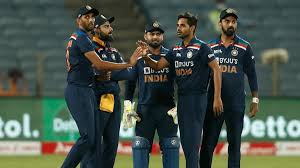 IND vs ENG Stats :  India defeated England by 7 runs in the third and final ODI in Pune and clinched the three match ODI series with 2-1. And thus India have won all the three series they played against England in this home season.

Earlier England won the toss and asked India to bat first. Shikhar Dhawan and Rohit Sharma gave a good start of 103 runs and set the platform for a good score but then England spinners bounced back as Rashid dismissed both openers and Moeen Ali dismissed Kohli and reduced India to 121/3 and later Rahul also got out and at 157/4 team was in trouble but inform Pant and Hardik counter attacked and their attacking fifties took India in a strong position but both couldn’t convert their innings into big scores and team bowled out for 329 runs. In reply England had poor start as Bhuvneshwar Kumar sent both Roy and Bairstow back to pavilion in his first two overs. Ben Stokes, Dawid Malan, Liam Livingstone all three got starts but couldn’t convert, Buttler’s poor form continued and at 200/7 England was in deep trouble but Sam Curran continued his fight and got good support from Adil Rashid and Mark Wood and took match to last over where England needed 14 runs but they couldn’t manage and lost the match by 7 runs. Sam Curran played 95* runs knock.

India vs England Statistical Highlights from Third ODI : A list of all the major stats and record which were recorded in the Third ODI in Pune –

6 – India have now scored 300 or more runs in each of the last six ODI matches. Three of the scores came against Australia while three came in this series.


95* – Sam Curran’s 95* is the joint highest score by a batsman batting at number 8 or below in ODI cricket.

3 – England played three series on their this tour of India and they lost all the three series.

6 – This was India’s sixth consecutive ODI series win over England at home.

651 – Runs were scored in this match by both teams combinedly – the second most runs in an ODI match without an individual hundred.

200 – This was Virat Kohli’s 200th international match as captain of India. Only the third Indian to achieve this milestone.