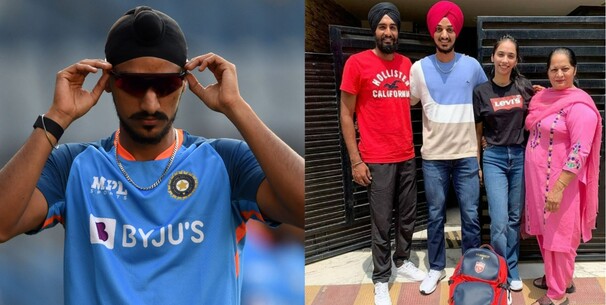 Arshdeep Singh Family: India’s left-arm seamer Arshdeep Singh has now become the death overs specialist for the side. In the absence of Jasprit Burmah during the T20 World Cup 2022, India was in a hunt for a bowler who could bowl consistent yorkers in the death and Arshdeep Singh put his hands up for the cause.

Jasprit Bumrah’s regular injury has been a blessing for Arshdeep Singh as the 23-year-old has developed confidence in himself. Arshdeep is capable of swinging the brand-new ball upfront and then he knows how to stop runs in the death overs. This makes him a bowler with different qualities.

Arshdeep Singh is a Punjabi, but he hails from Madhya Pradesh. Born on February 5, 1999, in Guna, MP to Darshan Singh and Baljit Kaur, Arshdeep along with his family moved to his hometown Kharar, Punjab quite early. His father was a Chief Security Officer in DCM, whereas his mother is a homemaker. Arshdeep has two more siblings, an elder brother working in Canada, and an elder sister Gurleen Kaur.

He did his schooling from Guru Nanak Public School in Chandigarh and was quite indulged in cricket right from his schooling days. Apart from his elementary schooling, Arshdeep Singh didn’t pursue any further studies as he got leaned completely into cricket. His major break in Indian cricket came during the 2018 U19 World Cup in New Zealand which India won under the leadership of Prithvi Shaw.

Arshdeep Singh came into limelight when he made his IPL debut in the year 2019 for Kings XI Punjab (now Punjab Kings). He used to bowl some quite overs with the new ball and was actively bowling in the death as well. Arshdeep’s prowess increased bowling the tight lengths in the death overs in the following seasons.

It was the 2022 IPL season where Arshdeep finished as the leading wicket-taker for Punjab Kings and soon he got a national call up where he made a real good impact at the 2022 T20 World Cup in Australia.

An ardent sports enthusiast who likes to write in such a manner so that the readers could relate themselves and feel the passion of the game.
Previous ArticleAxar Patel Net Worth: What is the net worth of Axar Patel? How much does he earn? Check here
Next ArticleIND vs SL Today Match Prediction for India vs Sri Lanka 3rd T20I– Who Will Win IND vs SL match?