Deepak Chahar Girlfriend Marriage proposal: Chennai Super Kings and Punjab Kings clashed against each other in Match 53 of Indian Premier League. The match ended with a comfortable win for Punjab Kings, thanks to a splendid and swashbuckling knock from captain, KL Rahul. The stylish opener made absolute mockery of the Chennai bowling, smashing an unbeaten knock of 98 runs from just 42 balls. Punjab Kings chased down a total of 135 runs in just 13 overs, which will enhance their net run rate by a significant margin.

Although, Chennai Super Kings faced their third consecutive defeat, there was some good news in store for Indian pacer, Deepak Chahar. Shortly after losing the match to Punjab Kings, Chahar proposed to his girlfriend, Jaya Bhardwaj. Jaya responded to Chahar’s proposal with an instant yes, and the couple captured all the limelight. Deepak Chahar and Jaya Bhardwaj shared a warm embrace, soon after the proposal had been accepted. 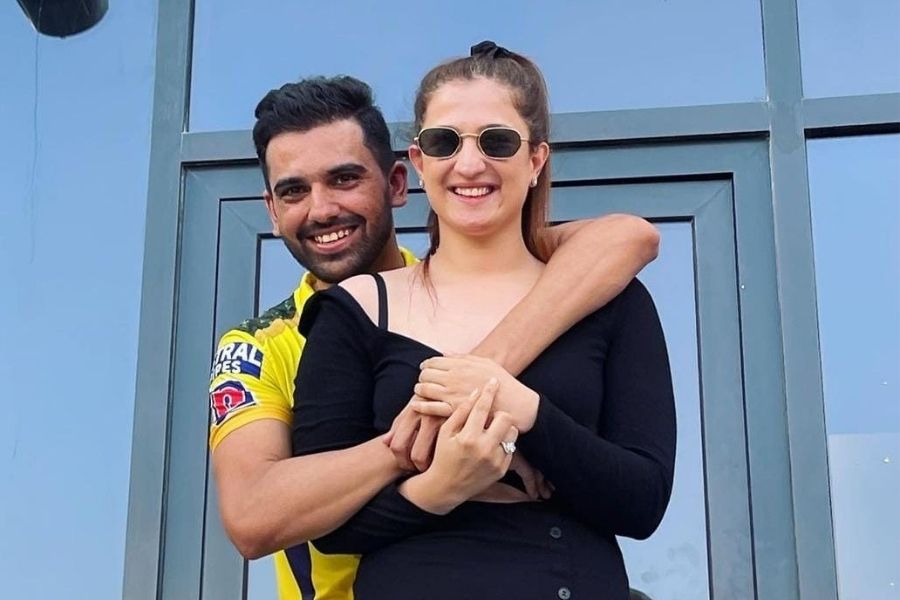 Deepak Chahar and Jaya Bhardwaj were rumored to have been dating for a reasonable amount of time, but the Indian pacer decided against taking their relationship public. There were rumors that the duo would tie the knot following the conclusion of IPL 2021.

Deepak Chahar did not have a great day with the ball, as he was smashed all around the park by KL Rahul. The pacer conceded 48 runs in his four-over spell, whilst picking up the wicket of Shahrukh Khan. Chennai Super Kings have now gone three consecutive matches without a win, and are still placed on the second spot with 18 points from their 14 matches.

It seems that Chennai Super Kings have lost the momentum going into the play-offs of Vivo IPL 2021. However, they are expected to finish second on the points table, and get two shots to reach the final.

Chennai Super Kings have lost to the likes of Rajasthan Royals, Delhi Capitals and Punjab Kings in the past week, as they look forward to regaining their form in the playoffs. Shardul Thakur and Faf du Plessis put on some encouraging performances for the Men in Yellow, as the former grabbed three wickets, while, Faf du Plessis scored 76 runs in just 55 balls.